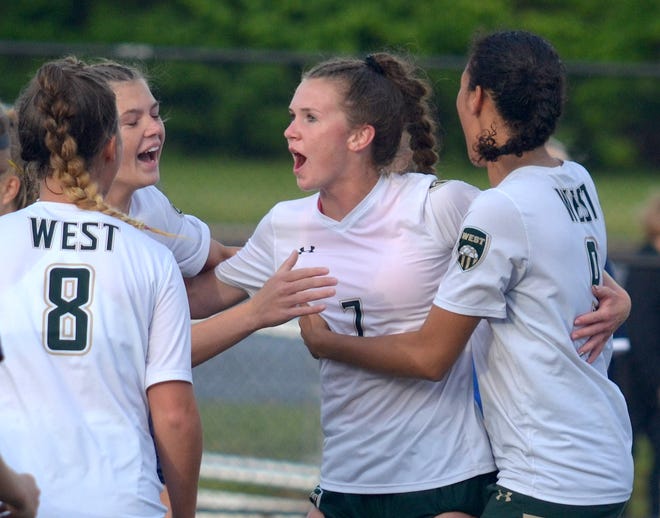 Zeeland West manager Ben Hondorp has summed up the impact midfielder Abby Winn is having on the pitch for the Dux.

And Friday, Winn was on – and so were the Dux.

Winn scored twice in the Division 2 regional semi-finals to lead the Dux to a 2-1 win over St. Joseph.

“After winning districts, we know what a good team we are. The more we play together, it gets better and better,” Winn said. “At the start of this season, I never thought we could go this far.”

The Dux (14-2-2) avenged a previous 1-0 loss to St. Joseph, one of only two this season, and will face Gull Lake in Friday’s regional final.

“We have 11 children who have been in our program for four years. They have had success in the past, reaching a certain point and not being able to complete it, but with their commitment and tenacity (we keep moving forward )” said Hondorp. “These kids just don’t want to lose. We talk about family…a lot of teams talk about family, but these kids live it.”

Winn scored midway through the first half from a penalty after St. Joseph was called for a handball in the box.

“The PK was a huge confidence booster. It increased my confidence and also drove the team forward,” Winn said.

The Dux began to muster chance after chance and finally got another goal when Winn found the back of the next with just 15 seconds left before half-time.

“There wasn’t much time left on the clock, maybe 30 seconds, I know Bella is capable of getting it back. She chipped it and I thought their keeper was going to come out, but she didn’t. did and I was able to go around their center back and hit him,” Winn said.

Winn continued to attack and place multiple balls in perfect spots for her teammates to create even more scoring chances from Marissa Ybarra and the rest of Dux’s front line.

“She is a very versatile player. She has played a lot of football at a very high level. For her club team, she plays in a different position than she plays for us, so with her vision and her IQ of football, she’s very tough against whom game plan. She distributes the ball very well and finishes very well, but she’s also one of the emotional leaders of our team,” Hondorp said. “When she’s on, the rest of us are on.”

Goaltender Grace Caywood and Dux’s defense were solid once again. Caywood made a handful of dive saves to keep the Dux in front.

“Grace and our defense played very well,” Hondorp said. “St. Joseph has a playmaker in the middle and Riley Terpstra did a really good job of taking out their distributor and frustrating her. Our backline was solid throughout the game.”