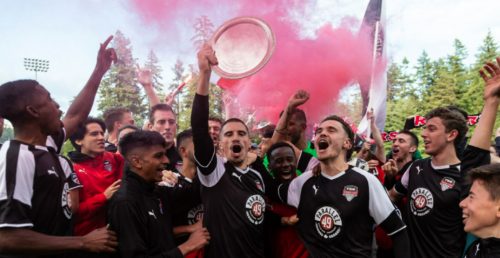 The TSS Rovers are set to become the first Canadian soccer club to turn their fans into owners.

The Rovers, who play at Swangard Stadium in Burnaby, are offering almost half of their attendance to fans in a first-of-its-kind partnership to help grassroots football grow in British Columbia.

Have you ever dreamed of owning a football club?

A real sharing. A real voice. A club you can call your own.

“We have always aspired to build what is needed with our own money, and we really believe there is an opportunity here to develop something significant,” TSS Rovers chief executive Will Cromack said in a statement. intro video on the team’s crowdfunding page.

“Buy a share, get involved. Your voice will be heard and it will be your club.

League1 BC, established in 2021, is an adult open-age Pro-Am football league run by BC Soccer “aimed at bridging the gap between youth and professional football”, according to its website.

“In 1986 we had 16 BC players on our men’s World Cup team playing in Mexico, and currently we have none,” TSS Football Club co-owner Colin Elmes said in the video. .

“And so our job is to make sure that number increases over the next few years, and the reality is that the system has done a very poor job of meeting the needs of 18 to 23 year old players over the many decades, and Rovers and League1 is the mechanism that I think will help solve this problem.

Highlights of the investment include the organization’s player/coach development period, the development of a future training facility/stadium, and the opportunity to “get involved on the ground floor as the Canada’s soccer market is booming with the Women’s National Team Olympic gold, a resurgent Men’s National Team, a newly formed professional league, and with Canada hosting the World Cup in 2026,” according to the pitch.

The investment opportunity ends on March 9, 2022.