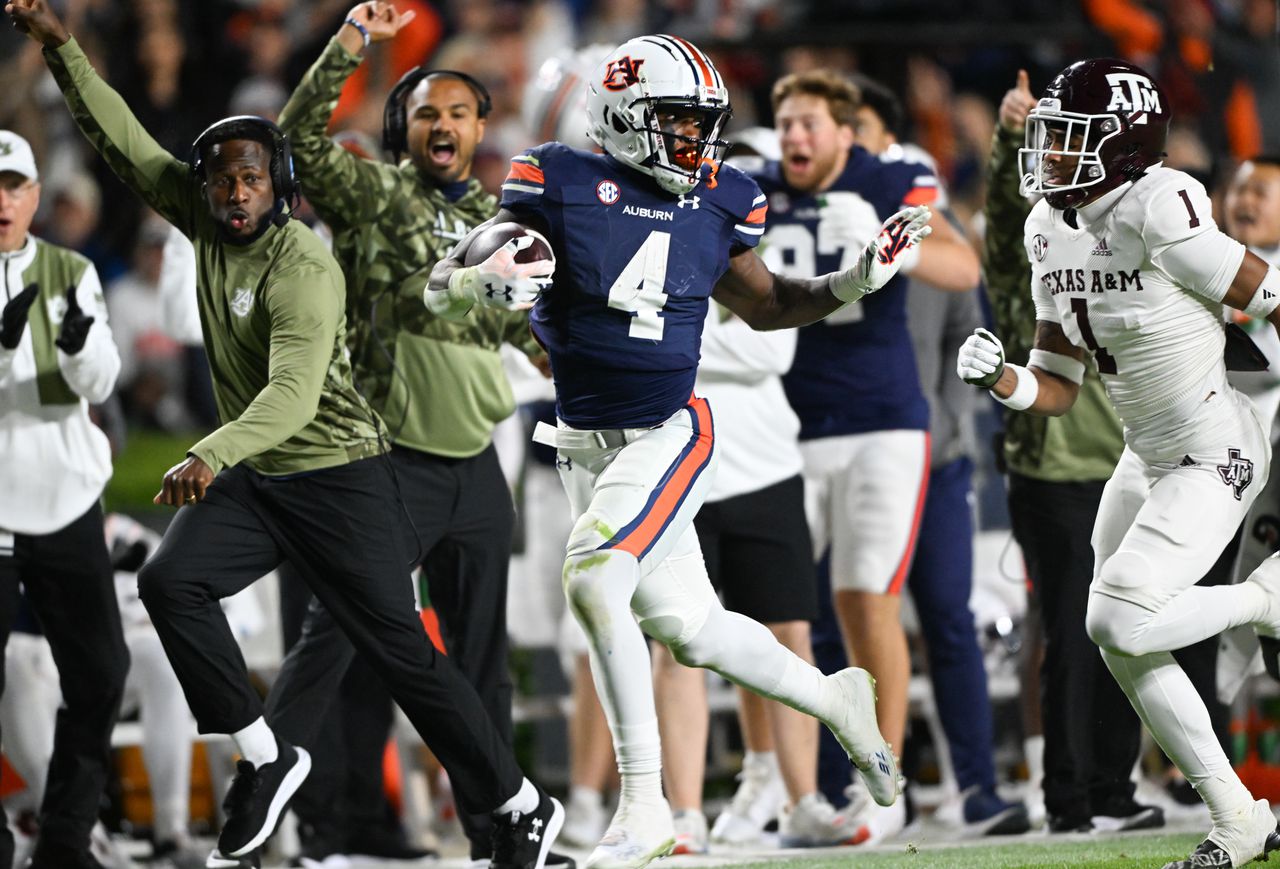 We will update live from Jordan-Hare.

– “First of all, I want to give all praise and glory to my lord and saviour,” Williams said to open the press conference. I want to thank my family – many sleepless nights, for allowing me to do what I do. I want to thank my coaching staff. I get so much credit for this, and it’s a shame.

— “I would like to thank these players. Dude, how awesome are they? I challenged them to be vulnerable, to open your hearts and let us in. You have people who care about you.

— “Honestly, I feel like that’s what the good Lord designed these trainers for,” Williams said. “To pour into these children.”

— “There are so many people who get their hands on these children. I really want to thank them for believing in a small town guy who was scared like a puppy last week.

— “This Auburn brand, this Auburn family – this place is special. This place changed the entire trajectory of the Williams family.

— “This place should always be on top of college football. It’s a place where you can grow, not just on the field but off the field. People are passionate about Auburn football, but also about humanity.

— “What we lack in talent, as people say, and bodies with people who have moved on…we can make up for it with our effort, our attitude and our state of mind.”

— “Why wouldn’t you come to Auburn?” I coached at IMG in 2017 and 2018, and every player that came to campus was like, ‘Coach, I see why you chose Auburn. It’s different. It has a different sound, a different feel. “

— “Look at me: First African-American coach in this position. It’s something that never crossed my mind. Not only do dreams come true here, but something you never thought of comes true.

Well – (exhales) First of all – I want to give all praise and glory to my Lord and Saviour. Next, I want to thank my family, who…lots of sleepless nights, allowing me to do what I do. I want to thank the technical staff, I tell you, I get so much credit for it, and it’s a shame. I think to myself all the time, like, if only you knew the kind of work they do behind closed doors and how they completely bought in, and being challenged to “we have to be more stubborn than our kids; like, they need us. Like, honestly, I feel like that’s what the good Lord designed for us coaches, is to pour into these kids’ lives, because I’ve had coaches in my life before. life of Steve McConnell, who was my peewee coach; of Rod Gray (?), who was my coach in college; and coach Raymond Farmer, who was my coach in high school. They kind of laid the groundwork for me, and I will be forever grateful to them.

“I want to thank these players. I mean, how awesome are they? I challenged them to be vulnerable, to open your heart, to let us in. You have people who care about you, people who want to see you do good. A lot of times it was like they didn’t feel that way, and sometimes, as I told my staff when I took this job, and I’m one of them, we let those kids down. It’s our job to uplift them, to inspire them, to empower them, to move them forward, and we haven’t done a good enough job.

“I want to thank the trainers. Wow. Robbie and his team. Dana, the equipment and her staff. Allison, his staff. So many people who get their hands on these kids, really want to thank them for, you know, just believing in a small-town guy who was scared like a puppy last week. I’m just telling you. Scared. And I let them know I was scared. Like, I need you all; I have never done that. Like, I’m going to lean on all of you.

“Last and foremost, this Auburn brand, this Auburn family, this place is special. It had changed the entire trajectory of the Williams family. I mean, from a player, undefeated season, fifth draft pick, rookie of the year, relationships – look here, it was like the whole 2004 team and the guys I played with, to see their faces, to see how happy they were—it’s unreal. This place is special. And to see the support from the fans, like, they put a drum on my back and they energized me, when in the beginning I was going to try to be like a lot of coaches, you know, like I was the big boss and maybe fold my arms and maybe look serious. You know how typical coaches do it. But thank goodness for Jarquez, Tank Bigsby, Damari Alston, Sean Jackson, Jordon Ingram. Luke Reebels, Justin Jones. Last week these guys watched me and they could see how nervous I was. I was like, ‘Yeah, I’m scared guys.’ They said, Coach, be yourself. We’ve been telling these guys for a really long time, y’all need to go talk to Coach ‘Lac. The same way you approach us and infiltrate our lives, you do to the whole team. I said, ‘Yeah, but it’s like six sevens of you all. There are 120 people in there with coaches. It’s different.’ Hearing that, the kids said to me, ‘Just be you, coach.’ I tell you, be you. I slept a little. And that’s what I decided to do. I will be vulnerable, open and transparent with them. I just appreciate this time. It’s special and something no one can ever take away from us. It’s an opportunity to be at Jordan-Hare. With that, I’ll start with questions.

“Wow. I said it to the defense – and everyone will tell you when I was a player here, I always loved watching the defense play. I love watching the defense soar. I love watching the relentless effort, the grind, the play together, the 11 men on the ball, the tenacity, the fight, the grind, the beating, the physicality. Love. Like I tell them guys I can’t wait to see these cats And what we lack in talent that people say and bodies and people that have evolved and opponents – we can’t do that, we don’t have the big guys – we can make up for that with our efforts, our attitude, our mindset. Those are the things I can control. One thing I know about a team, if we can pull in the same direction, we can believe in each other – a team that fights, a team that serves, a team that is disciplined, a team that believes – the sky’s the limit. I’ve been on a team that’s done that. Like I said to them, I want you all to feel the joy that I had to be here four years at Auburn University. And being in a relationship with guys and two decades later, the same brotherhood group, the homies I was playing with, we still do life together. So that’s what I really want for these young men in the locker room.

On Auburn becoming a contender in the future.

“Man, watch all the college football. Why wouldn’t you want to come to Auburn? I coached at IMG from 2017 to 2018 and every player that came to campus here, he was like, ‘Coach, I see why you chose Auburn. It’s something different. It has a different sound. It’s different. So, with the new facility and the people of Auburn, this place has always been on top of college football. Because, I can tell the rookies, they really are the people inside the walls. People who serve, people who are part of the community. And it’s a place where you can grow, not only on the pitch, but also off the pitch. People who are passionate about Auburn, about Auburn football, but also about humanity – love, care, work, hard work. It’s all kids who want to improve, who want to serve and do great things in life, you can do right here in Auburn. It is a place where dreams come true. Look at me. First African-American to hold this leadership position. Something I never even thought of. It never crossed my mind. So not only do dreams come true here, but things you don’t even think of can come true. Who would have ever thought I would be here, because God knows I’m not.

“A great game from Colby. I mean, wow. Tempers were on fire, you know, guys, you could tell, guys started barking attacking. These defensive guys, they’ve always been like that. They always bark at offense. We sort of stalled there in the third quarter, but for this young man to make this game, in my four years here with him and watching him grow as a young man at what he’s done ( and) the leader that he is, I’m so happy for him. So glad he got the opportunity to make this game and give us some life and put some kind of stamp on it, because they had some momentum there, and getting this strip fumble was a great moment.

On the game ball:

“My guy D-Hall. I’m not really going to think about any ball games, and having D-Hall and Shenk and these guys and Colby Wooden and these guys coming in and saying, ‘Coach, we appreciate what you’ve done, how you’ve poured into our lives. The change (and) you believe in us. For these young men, introducing me to this game ball is everything. I am eternally grateful.

“Well, we had two balls on the floor, so I’m going to work on that. There will definitely be ball safety drills next week, and they know I’m going to stop them. They know that. Let me tell you something about them too, I’m so lucky to have the opportunity to train two guys, young men of character, who all this time have let me into their lives. and be vulnerable. And they know that I stand on the truth, and I’m gonna call a spade a spade. A lot of times they get frustrated with me, but like I told them man, “I love you too much to see you pass through the stages or not giving it your all every day.” And seeing how Tank Bigsby went from being a freshman to now, that’s it. He’s as raw as they come. Big heart. Then Jarquez, a workaholic. Served, very selfless. So it’s a joy to see these guys contribute in a way that they contribute, but it’s s I told those two guys, I know how much they wanted this for me. I could see it on their faces. By the way they wanted me to succeed. Dude, that’s awesome. It’s great to be able to train them, guys.