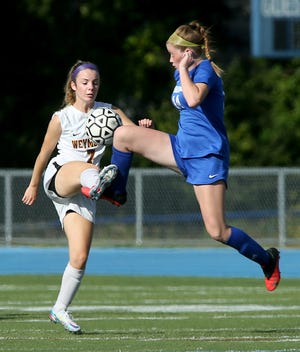 Weymouth women’s football coach John MacIntyre hopes each game will be another step forward for her young side, who graduated 12 seniors in June.

“With each game we gained a little more experience,” he said. “There is more we can take away from every game.

Captain Riley Grable got her second hat trick of the season against Braintree, and she has scored seven goals in total in the first five games of the season.

Grable scored three goals for the Wildcats in a 4-0 win over Milton earlier this season, and Palmer scored the fourth goal with an assist from Julia O’Brien earlier in the game.

“I think a big part of us in the future is Maddie Palmer,” MacIntyre said. “She’s scored two goals in her first two games for us. She helps make a big difference for us at the top. She gives us another weapon. Riley Grable has had two outstanding games in a row (against Milton and Braintree) “We’ve seen other players. Riley Bonner has competed hard in all of our games so far. Liv Caldwell has done a good job defending.”

The Wildcats are making some progress despite the non-championship losses.

He said the Wildcats “are making progress” since they faced two tough non-league teams at the start of the season.

“We have a young team and we had to make progress and improve,” said McIntyre. “These two non-league games have been a good learning experience for us for where we’re trying to get to. Braintree and Milton’s games have been better for us, and we have to continue in that direction. well, and we’re going in the right direction. We played a solid game against Brookline. We picked up a few players from the injured list, and that also helps. I hope we continue in the right direction. “

MacIntyre said the team “learned the level of play” in non-league games which would come in handy for the remainder of the season.

“It was good for some of the young players who don’t have a lot of college experience to see what two good high school football teams look like,” he said. “It gave them a benchmark that we need to get here. We recently had a great (team) discussion about what our goals should be and how we can achieve them.”

Weymouth suffered his first Bay State Conference League loss to Brookline, 1-0 at home on September 23. The undefeated Warriors took advantage of an opportunity in the first half and held on for the win. Weymouth had a few scoring opportunities in a home and away game but they didn’t finish.

“Obviously, we got two positive results after we had two negative results,” MacIntyre said. Every day I think we can take some positives and build on them the next day in practice. I think everything will be fine. “

The Wildcats will play in the league for the remainder of the regular season. They faced Walpole on September 28 at home and are at Wellesley (September 30) and will be at Needham on October 5 and Newton South in a non-league game on October 7.