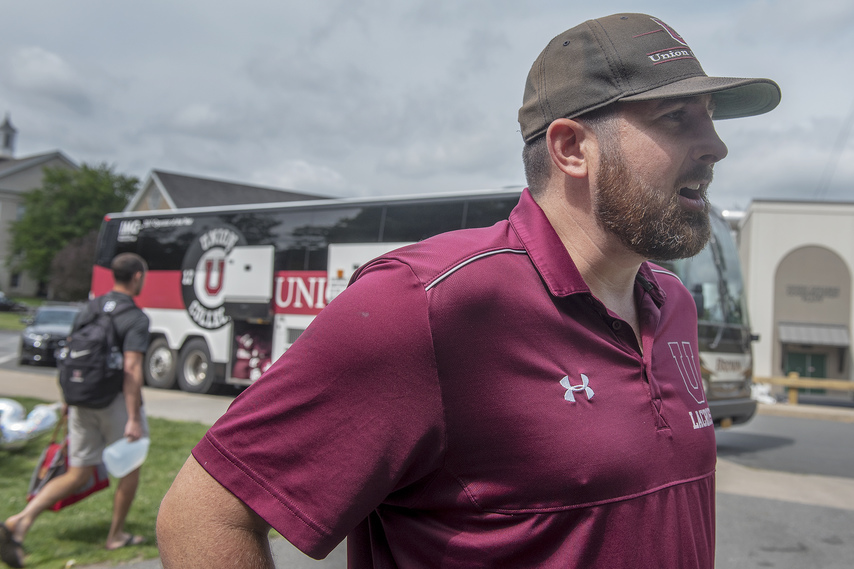 Union College may have to find more room for all the awards the men’s lacrosse team won last season, but there is one that will never fail to put a smile on head coach Derek Witheford’s face.

Led by Witheford, a 2011 Union graduate who recently completed his third season at the helm, the Union coaching staff was recently named Division III National Coaching Staff of the Year by Intercollegiate Men’s Lacrosse Coaches Association.

“It’s a staff award, and it’s important to me,” Witheford said by phone from Long Island, where he was recruiting. “Being named coach of the year doesn’t really sit well with me, but an award that recognizes all of our staff is better.”

“Marcel is the offensive coordinator and scouting coordinator who has been a big asset to me, personally,” Witheford said. “Nate has been doing other things, and he may have finally caught the training bug. Kyle and Sean have been a huge help. Sean ran our box for three years and a few face-offs. He really has a lot of autonomy.

The group led Union to one of its most successful seasons in school history, winning a program record 18 games and becoming the third Union team to reach a national championship game.

Union started with a record 10-game winning streak. He went on to win four NCAA Tournament games, doubling the previous program’s record despite a schedule with 10 nationally ranked opponents. The Dutch reached the Division III championship, which they lost to fellow Liberty League side Rochester Institute of Technology 12-10. Union (18-3) has been ranked nationally in every poll this season.

“It reminds us of what a great season we’ve had, but we’re into recruiting and into next season,” Witheford said. “We played for a national championship that Sunday [May 29], and we recruited the following Sunday. For the returning guys, they are already in their weightlifting and muscle building programs, and a lot of guys are playing in summer leagues.

Burnes finished with 61 goals and 27 assists for 88 points. He ranks second in single-season program history in goals and points. He averaged 4.5 points per game in the five games of the NCAA Tournament.

Titus, also a second-team USILA All-American, was instrumental in the success of Union faceoff and defensive units. He ranked third on the team in ground balls with 61 and caused 12 turnovers. He also had a career-high 14 points on eight goals and six assists.

Belluche led all defensemen with 46 ground balls and 27 turnovers. He was also a first-team USILA All-American.

More from The Daily Gazette:

More than 10,000 grassroots footballers participate from this Friday in MADCUP 2022