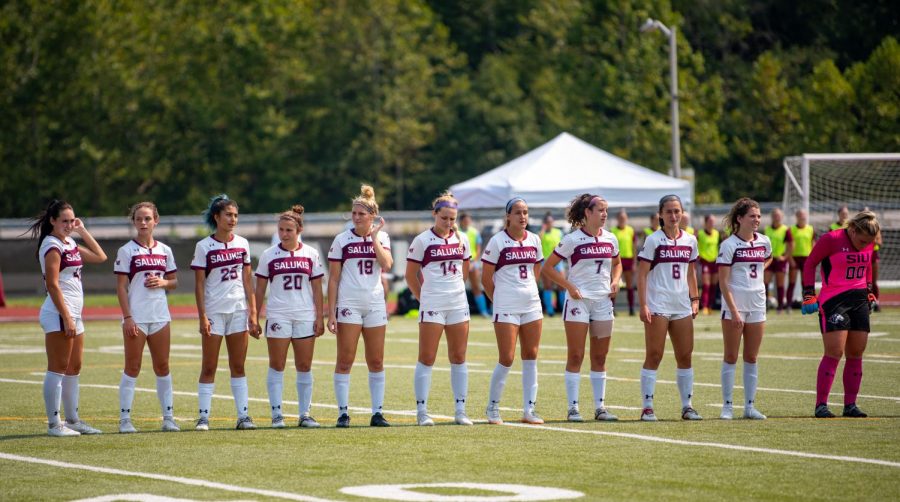 On November 2, 2019, the Saluki Football Team walked off the field at the Lew Hartzog Track and Field Complex after winning their fifth game in program history against the visiting California Baptist Lancers. It was the last game of the women’s soccer program’s inaugural season, a campaign that ended with a 5-10-2 record.

Three years later, the team is still looking for its sixth victory.

What followed that first year became a series of seasons to forget. The 2020 season was postponed to next spring and ended with an 0-6-3 record with only one goal scored all year. Most recently, SIU finished 0-15-1 in the fall of 2021, extending their winless streak to 26 games.

The tough stretch for Saluki football came with a few asterisks. The COVID-shortened 2020-21 season has forced SIU to play a tough schedule, almost exclusively facing established opponents from the Missouri Valley Conference. The team then faced a rapid turnaround just a few months before the following year, which was its worst yet in terms of records.

As the 2022 season kicks off, the team is looking to put that period of futility in the past as it enters the Craig Roberts era.

On March 15, Saluki Athletics announced the hiring of Roberts as the second women’s soccer coach in program history. Roberts previously served as head coach at Grambling State, Ball State and UT Martin, racking up a 150-92-45 record in 15 seasons.

“Craig has an impressive track record building football programs at other institutions and has demonstrated a strong commitment to student-athlete development,” acting athletic director Matt Kupec said at the time of the interview. his hiring.

Although no longer a brand new program, SIU women’s soccer continues to face the challenge of building a team from the ground up. With a new coaching staff, he is making a fresh start in this process.

“It’s a brand new start with the legacy of this program,” Roberts said. “We’ve defined a lot of new values, new standards, new expectations, and we’ve also tried to create the environment that we want: a well-connected family team. We have a brotherhood within the team.

Before a team can start winning, it has to establish a good culture. With a focus on unity, the team might face an uphill battle, but the results they have from this season will be won or lost together.

“I feel like everyone is on their toes, myself included,” junior forward McKensey Bunch said. “Everyone is ready to go, especially with the new coaching staff bringing all the new material to the table…I think we’re ready to dive in and get to work.”

The first game of the year, the home opener against Lindenwood, saw the Salukis face a familiar result: a 2-0 shutout. While the scoreline was not to be desired, the game on the pitch represented the first step in what will be a long process for the team to pull themselves out of the abyss.

“Our goal has to be to take the positives out of every game,” Roberts said. “For 60 or 70 minutes of this game we took a lot of positives out of the game and what we’re going to do now is dissect the last 30 minutes and make sure we correct those mistakes.”

Saluki Football will face a tough task on the road against Missouri on Thursday before returning to Carbondale for a three-game home game starting Sept. 1 with Alabama A&M.