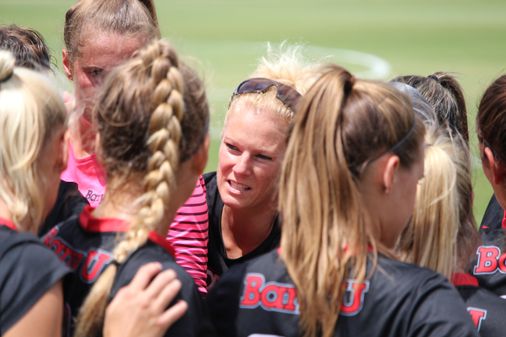 In a formidable two-year run, Sarah Dacey led the Hingham women’s soccer team to a 34-2-2 record and the MIAA Division 1 Finals last fall. That followed a 45-15-5 record in four seasons at Barry University Division 2 for the former Framingham High and University of North Carolina football/lacrosse player.

But when an opening at Curry College presented itself, in a dual role of soccer/lacrosse coach, it was too much to pass up. On Monday, Dacey was officially named women’s soccer coach and interim women’s lacrosse coach at the Division 3 school in Milton.

“It wasn’t necessarily something I was looking for, but deep down I had always wanted to be a collegiate coach again,” Dacey said. “A spot opened up, with Curry being local and such a strong program, it was a great opportunity. I’m so excited to start.

With 15 Massachusetts residents on the football team and nine on the lacrosse team, Dacey plans to use his local roots and new knowledge of the area to help secure commitments from area players.

“I will definitely be recruiting heavily in Massachusetts and I will be able to see a lot of games for scouting purposes,” Dacey said. “It’s good to have the high school experience because now I know the teams and the levels. I loved my time at Hingham, but I’m also excited for what’s to come. I’ve never been head coach of two sports simultaneously, so I think I have to see what it is over time.

On the lacrosse field, Curry opens his 2022 season on Feb. 23 against Colby-Sawyer. The women’s soccer team finished 8-10-1.

Hingham sporting director Jim Quatromoni has said he would like to have a new football manager in place by the end of February.

Cam Kerry can be reached at [email protected]