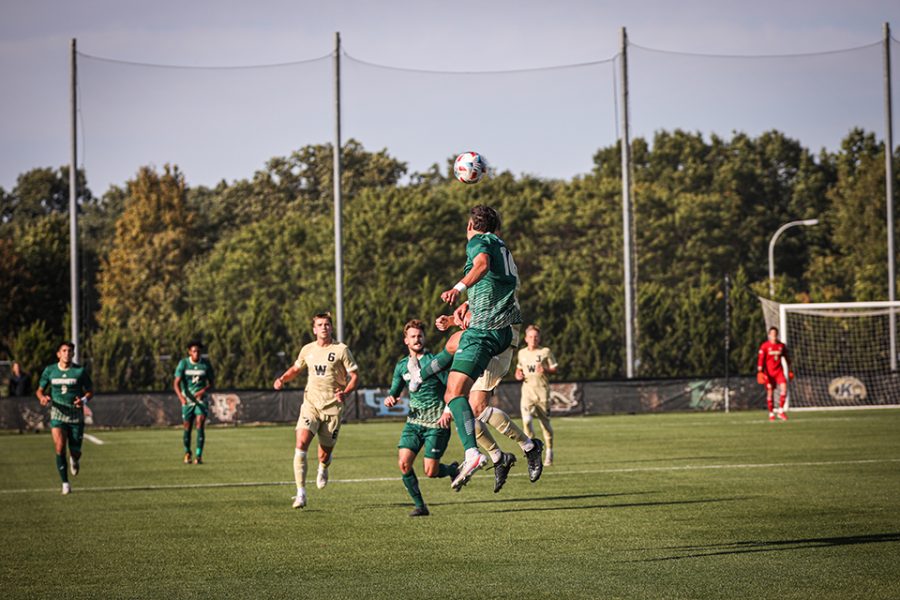 The Hornets allow a goal in the fourth minute

First-year defenseman Alejandro Padilla directs the ball against the Broncos on September 24, 2021 at WMU Soccer Complex. The Hornets have allowed one goal or less in four straight games.

After 110 minutes, Western Michigan University and Sacramento State were unable to break the deadlock, ending the game in a 1-1 draw on Friday afternoon.

At the final whistle, the players fell from fatigue after a draw in overtime.

The Hornets traveled to Kalamazoo, Mich. To face the Western Michigan University Broncos, and the two turned out to be tied.

The Broncos scored their goal early in the fourth minute as senior defenseman Philip Smith put Western Michigan on the scoreboard. The goal was Smith’s first of the season.

In the 29th minute, Sac State replaced second-year forward Michael Gonzalez. Just eight minutes later, he tied the game as he sliced â€‹â€‹through the Broncos’ defense, scoring his third goal of the year.

Objective for @SacStMSoccer! Second-year forward Michael Gonzalez tied the game to one in the 38th minute. The substitute at the start of the match already makes the difference, @SacStMSoccer 1 @WMUMensSoccer 1, as half-time approaches. @SH_Sports @TheStateHornet

“My voice died out after the game because of the screaming, but other than that I feel great, I’m excited to start the conference game next week,” said Gonzalez, whose only shot of the game was was the Hornets’ only score.

In addition to the two scores, the first half was sloppy with 14 faults and six offside between the two teams.

Part of the negligence could be attributed to the absence of junior midfielder Oscar Govea from Friday’s game, as he was suspended for receiving a red card in Sunday’s loss to Saint Mary’s College.

â€œOscar is one of our captains,â€ said head coach Michael Linenberger. “He’s a team manager, he’s arguably our most talented football player, so it’s difficult without him.”

The second half was a brighter game as both teams put their legs under them, underscored by junior goaltender Ryan Curtis’ diving save on a shot from senior Broncos midfielder Caden Jackman. It took a full extension of Curtis to keep one up.

“I don’t think they really had a ton of dangerous chances on us, the few they had were good, I think the saves I had were decent, nothing too terribly dangerous.” Curtis said.

He made five saves throughout the game.

In the 64th minute, first-year midfielder Axel Ramirez hit the post as he narrowly missed what would have been his second goal of the year. Ramirez finished with five shots, three on goal in 109 minutes of work.

He remained tied for the rest of the settlement as both teams headed for a two-half, 20-minute overtime where a goal scored would have decided the game.

In overtime, the Hornets’ main chance came when West Michigan junior goaltender Isaac Walker was called out as the ball reached Ramirez. Ramirez shot a ball over Walker’s head, but Walker sprinted back and managed to hit the ball over the net avoiding the winning goal.

â€œI think we did well,â€ said senior defenseman Tyler Moss. â€œMost of the chances we’ve created in a game. We had four or five very good chances, unfortunately on a few, off the post in overtime, the goalkeeper made a very good save.

At this point the players were visibly tired and there were several injury breaks during extra time with the players cramping in the later parts of the game.

It’s finish. After 110 minutes @SacStMSoccer and @WMUMensSoccer tied with 1 goal each. The Hornets drop to 2-6-1 as they head into the conference game starting Wednesday. @SH_Sports @TheStateHornet

â€œI’m disappointed we didn’t win, but overall it was a good performance from us,â€ said Linenberger. â€œDifficult situation, traveling in three time zones across the country. It was a full day of travel.

The Hornets get their first draw of the season as they head into conference play with a 2-6-1 record, as the Broncos move up to 2-3-3.

Sac State returns to action on Wednesday in a home game against the Big West against Cal Poly at 4 p.m. at Hornet Field.