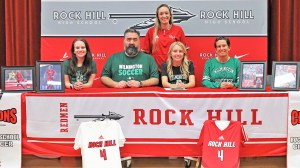 It is a traditional song for those who support an incumbent president running for a second term.

Emmi Stevens is not a politician but she is a football player and will add another four years to her career after signing on Friday to play for the Wilmington Lady Quakers.

Not only does Stevens add four more years, but she is Rock Hill’s football commander-in-chief as she becomes the first Redwomen four-year-old to play college football.

Wilmington has always been at the top of Stevens’ list of possible college choices. She also spoke with Wittenberg and was contacted by Marshall.

“I wanted to go to Wilmington because my sister (Bella) is going there and she could show me around and I like the coach,” Stevens said, noting his sister runs for the Lady Quakers.

The Quakers lose 10 seniors from last season’s squad, but she said there’s nothing certain about her position on the depth chart and she knows leveling up will take time .

“I’m going to have to work very hard because it’s a very different pace and everyone is fine.”

Football is not the only sport played by Stevens. In fact, its past sporting history has a plethora of activities.

She has played soccer and softball for the past four years, been a cheerleader for three years, played basketball for two years, and ran one year in track and cross country.

Stevens was an outside midfielder for the Redwomen and she expects to play in the same position at Wilmington.

As an outside midfielder, she scored 36 goals in her career, including the program’s first goal. She also had 36 assists.

Rock Hill won a third straight Ohio Valley Conference title last season and reached the district final for the first time in program history. She said the home section title game was one of her most memorable moments.

“I was really proud of myself and my team. We worked so hard over the summer. We worked from May to the season. We had a lot of new players and some had never played and they were starters.

Stevens has served as team captain for the past two years, twice first-team All-OVC, first-team Coaches All-District last season, a second all-district team selection as a junior, all district honorable mention as a freshman and sophomore and she was named offensive player of the year.

“She was voted captain for two years, so that speaks for itself and she will work hard and be fine,” Collins said.

Stevens said Collins and her assistant Josh Reynolds had been big influences on her along with her mother Myra.

“I used to go down. I was a bit of a Debbie Downer. I was going down very easily and they always pushed me to be better. And my mother. She would be in the crowd screaming and screaming and that would keep me going,” Stevens said.

A graduate with honors, Stevens plans to major in education with possible plans to coach youth soccer.