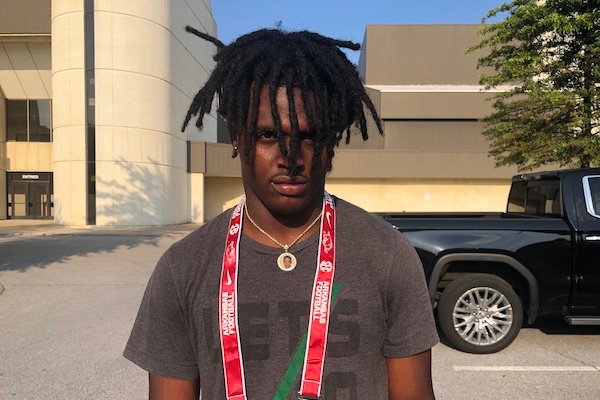 ESPN’s 4-star running back target Cedric Baxter Jr.’s visit to Arkansas puts the Razorbacks in his top five, and he plans to return for an official visit.

He arrived in Fayetteville on Thursday and was able to spend a lot of time with coach Sam Pittman, running backs coach Jimmy Smith, special teams coordinator Scott Fountain and other staff.

“Great people, real people,” Baxter said Friday night. “Everything feels authentic. It doesn’t feel fake. You can’t quite describe the real, you just feel it. From Coach Pitt to the strength and conditioning coaches, they’re all real.

He visited the Razorbacks last July and watched them win over Texas A&M in Arlington, Texas. Seeing Arkansas leading the SEC and Power 5 schools in a rush caught his eye.

“Last time I came the season didn’t start because I came in the summer, but I watched them this year and they led the SEC in rushing and the Power 5 in rushing,” said he declared. “I’m a ball carrier, so I want to run the ball.”

Pittman’s experience as an offensive line coach also helped the Razorbacks’ cause.

“On top of that Coach Pitt (was an) O line coach so you know he wants to run the ball,” said Baxter, who plans to leave on Saturday morning.

Razorback’s focus on statewide athletics was evident when he and his family attended the first game of Arkansas’ baseball game against LSU with Smith and Fountain.

“I just went to the baseball game and the people there knew me,” Baxter said. “They approached me shaking my hand and saying hello and stuff like that.”

Fan support is another selling point of the program.

“It means a lot because it shows they care about football, rookies and recruiting,” Baxter said.

ESPN ranks him 4th in running backs nationally. Baxter rushed 202 times for 1,718 yards and 26 touchdowns as a junior.

He announced on Twitter that he dropped into five schools during today’s visit, with Arkansas holding one of the spots. Baxter doesn’t know when it will release its other top four schools.

He explained why the Razorbacks are one of his top schools.

“Like I said, they’re real,” Baxter said. “Coach Jimmy Smith has been recruiting me since day one and he never stops.”

Smith has many family and friends in South Florida and his wife, Quanisha, is from Miami. Baxter’s connection to Smith and Fountain is the main reason Arkansas is in good standing with him.

“Coach Smith, we’re both from Florida so I can relate to him,” Baxter said. “I keep saying real, but he’s also a real person. Coach Fountain, my coaches know him. Our OC knows him. He tells me a lot about him and what a great person he is.

Baxter doesn’t have a specific timeline for his college decision.