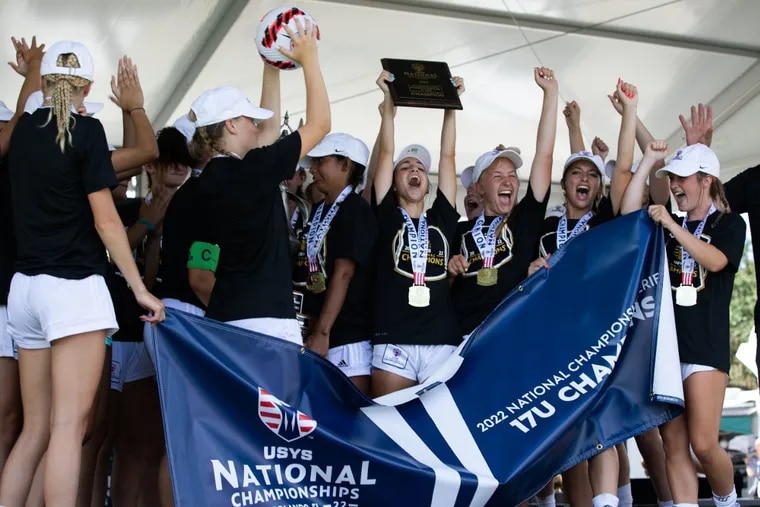 A women’s team from Northeast Philadelphia Soccer Club won a U.S. National Youth Soccer Championship under 17 on Sunday, becoming the first winner of the title of any gender inside the city limits. city ​​since 1967.

It was the second year in a row that the Coppa Rage side made a USYS final, having reached the Under-16 final last year. They lost that game to La Roca of Weber, Utah.

“Thrilled to death for these girls who lost last year in the final, and put their heads down and aimed to come back and win, and they did,” said Coppa Rage coach Tom FromGeorge.

Union’s Brandan Craig, also from Northeast Philadelphia, was on hand as the team played in Orlando City the previous night. Craig was on the Union bench for the 1-0 win.

“It was a pleasure to watch the final and very proud of the girls!” he wrote on Twitter after joining the Coppa Rage players for a photo on the pitch.

Philadelphia SC joins a long history of local teams that have won American football youth titles, four from South Jersey and 17 from Eastern Pennsylvania dating back to 1938. The last was last year, the Real Jersey FC men’s under-15 team – a program run by Rusty Aaronson, the father of Brenden and Paxten Aaronson of the Union.

The last local women’s team to win a USYS title was the South Jersey Elite Barons under-16 team in 2018.

Three local teams have reached the semi-finals of the USYS tournament this year: Ukraine’s Under-17s and Yardley Makefield Soccer Under-14s, and Real Jersey’s Under-16s. This Real team includes Jaden Aaronson, sister of Brenden and Paxten, who will be a sophomore at Shawnee High School this fall.

READ MORE: Meet the Bucks County teenager who played for the Jamaican Women’s Under-17 soccer team