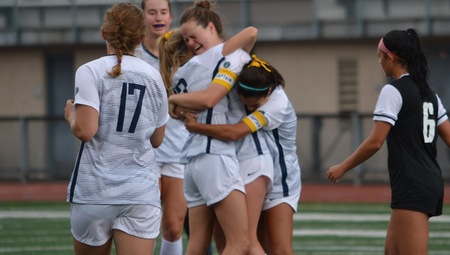 Behind stellar performances across the roster, the Case Western Reserve University women’s soccer team crushed John Carroll University and Muskingum University 7-0 and 7-1, respectively. Fourth-year midfielder Anika Washburn was named SAU’s offensive athlete of the week and Spartan Club athlete of the week for leading the Spartans with her 12 best points with 5 goals and 2 assists.

In the game against John Carroll last Thursday, the first half was incredibly intense as CWRU held a 21-1 advantage in shots attempted. The Spartans had obviously gained momentum on the attacking side but, oddly enough, both teams went scoreless before half-time.

Everything finally clicked in the second half. CWRU opened with a quick goal at 48:12 to take a 1-0 lead. Fourth-year midfielder Greta Lazzara scored her first scoring of the season from the top of the box with an assist from first-year midfielder Sydney Schenk.

Washburn exploded for two consecutive goals over the next five minutes to give the Spartans a 3-0 lead. At 49:34 into the game, Washburn dribbled the ball down midfield and shot it from the top of the box to the lower left corner of the goal for his fifth goal of the season. Less than four minutes later, Washburn recovered the ball following a blocked shot from third-year forward Helina VanBibber. Washburn then finished the game with a shot down left of goal once more; VanBibber received the assist.

After 4 shot attempts and a Spartans corner, they managed to score their fourth goal of the game in the 69th minute. Third-year forward Aniya Hartzler sent a cross to first-year midfielder Sophia Stellabotte, who found the back of the net and scored the first goal of her college career.

Eight minutes later, fourth-year forward Christina Hickson returned to the game. At 76:26, Washburn passed to Hickson, who dribbled the right side of the field and lasered the ball into the lower right corner of the net. Hickson picked up the ball again from third-year defender Laura Gorjanc in the 88th minute of the game and sent it flying into the net from the top left corner of the box to give CWRU a 6-0 lead.

Washburn froze the game with a quick shot from the top right corner of the box in the last minute of the game thanks to an assist from second-year defender Grace Bratter. With Washburn’s third goal of the game, the Spartans won 7-0.

CWRU had a choke advantage in attempted shots, taking 43 tries while allowing only 2 from John Carroll. Likewise, the Spartans got 16 corners against just one for the Blue Streaks. Second-year goaltender Maggie Storti started and played over 61 minutes for the Spartans and improved to 7-0-0 this season. Second-year goaltender Sydney Stone finished the game and made a save.

â€œI was actually really excited about our performance as John Carroll,â€ said head coach Jen Simonetti in an interview with the CWRU’s sports department. â€œI thought our ball movement was excellent, our transition to defense was phenomenalâ€¦ [and] our pace of work, in general, was really, really good. And everyone who has entered the field has competed very well for us. “

Speaking of the incredible start to the season, Washburn highlighted the team’s “ability to own the ball” as well as the “depth of [the] team.”

“Each member of our team is able to build from the back, change the ball frequently in attack and create dangerous opportunities with a positional rotation,” said Washburn. “We [also] have extremely talented players who can come off the bench and have a positive impact on the game.â€¦ We were very excited to compete given that we lost a season against COVID-19 which brought a lot of energy and energy. enthusiasm to our team. “

Saturday’s game against Muskingum University went differently and was marked by multiple mental mistakes. Muskingum’s Morgan Meisel intercepted a pass from CWRU Storti’s starting goaltender and kicked it to give them a 1-0 lead over the Spartans around 12 minutes into the game. It was only the third goal conceded by the Spartans this season and shattered a streak of 480 minutes and 10 seconds without scoring by the CWRU defense.

That shock seemed to recalibrate the Spartans and they immediately hit back with back-to-back goals. At 12:34, Washburn’s shot attempt was deflected to Stellabotte, who scored the ball to put the Spartans on the board and tie the game 1-1. The milestone marked Stellabotte’s second goal and Washburn’s fourth assist of the season.

Just 90 seconds later, fourth-year midfielder Molly Whelan received an assist from VanBibber and found the back of the net 25 yards in midfield for her first career goal.

â€œIt was an extremely moving experience for me,â€ said Whelan of this momentous occasion. “I had been injured for my first and second seasons [and] COVID-19 canceled my junior season, so this is my first [true] season and it was really good to score with the feeling of having really conquered the problems of the past.

For the women’s soccer team, however, this game made a lot more sense than just a seasonal competition on their schedule. The team raised funds for three causes: the VanBibber Service Legacy, Gigi’s Gifts and Go4theGoal. The VanBibber Service Legacy, created by Helina VanBibber’s family to honor Helina’s father after he lost his life to glioblastoma, raised funds to help provide assistance dogs to people with cancer, to continue research on glioblastoma and to support caregivers. Gigi’s Gifts is a non-profit organization that offers special wig caps to children who have lost their hair while battling cancer. Go4theGoal provides financial support, develops and implements unique hospital programs, funds innovative research and makes personal wishes come true for young cancer patients.

These fantastic causes were on the minds of players and coaches, giving the game a stronger emotional feeling.

â€œWe lost our Team Impact teammate Gigi [of Gigiâ€™s Gifts], last spring with neuroblastoma, so I don’t think it’s a coincidence that I scored my first goal, â€Whelan explained of his motivation and motivation for the game.

In the second half, Washburn scored her first goal of the game with an assist from fourth-year forward Ella Copich to give the Spartans a 3-1 lead. At 66:18, second-year forward Kati Davis scored her first career goal after receiving an assist from Hartzler. Twelve minutes later, Hickson joined the scoring squad with a solid goal from an assist from VanBibber, giving the Spartans a 5-1 lead. Stellabotte and Washburn finished off the Muskies with one goal apiece in the final nine minutes to win the game 7-1.

The Spartans finished the game with 43 shots, which was the third game in a row with at least 40 shots attempted. Storti played all 90 minutes this time around and improved to 8-0-0 this season with an average of 0.42 goals against.

After that game, CWRU won 22 consecutive non-conference games in the regular season. Washburn, who leads the team with 22 points (9 goals and 4 assists), tied former Spartan Sarah Rogers (class of 2002) for the second most goals in program history. In addition, Washburn amassed 59 career points and tied Michelle Sabick (class 91) for the fourth most points of all time.

â€œMy successful performance so far has been [mainly] because of the teammates around me, â€Washburn said of her amazing play this season. â€œBy having 10 other players on the pitch who have the ability to score and create opportunities, our opponents cannot focus on just one player’s defense. The movement of my teammates off the ball has allowed me to find them for assists [and for my teammates] to set myself up with goals.

Washburn will have the opportunity to completely break several individual, team and program history records over the next year as she plans to stay an extra semester next fall.

The women’s football team will wrap up their game against New York University this Saturday, October 2. The game, which kicks off at 11 a.m. at DiSanto Field, marks the first of seven UAA conference competitions this season.

â€œThe UAA teams are some of the best in the country,â€ Washburn said of the upcoming schedule. â€œEach game will be a new challenge for us. “

While the stakes are higher, the Spartans are confident and prepared for the intensity of the conference, especially with their momentum of the past few weeks.

Give me the ball faster