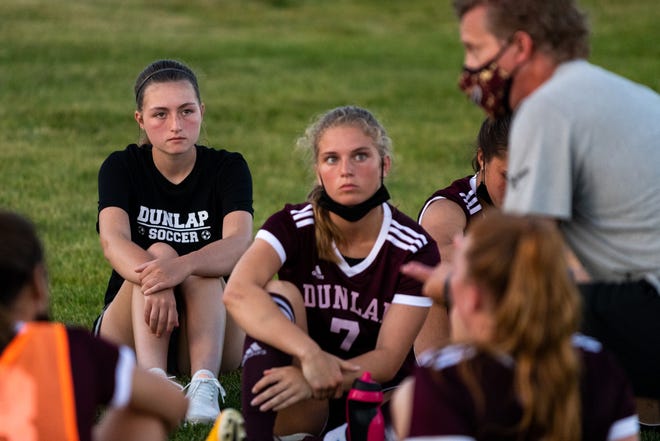 Tessa Sutton showed her fighting spirit last year when the Dunlap footballer was diagnosed with cancer in late May as the high school season drew to a close.

Sutton missed the end of last season but was trying to return to the field in March when she finished her treatment. She was back in school this year, attending practices and even hoping to play in a game for the Eagles, who are 14-2-2 as the regular season draws to a close.

But a few weeks ago, Sutton’s cancer was rediscovered and she continues to battle a malignant chest wall tumour. She is recovering from surgery and continues to receive care at St. Jude Children’s Research Hospital in Memphis and Peoria.

Tessa’s parents, Rich and Michelle Sutton have been overwhelmed with all the support the community has shown.

“It’s been amazing,” Michelle Sutton said. “Right after her re-diagnosis, the Washington women’s soccer team gave her a card with gift cards and they all signed it.”

Vote for Tessa:Sutton is nominated for Athlete of the Week

But the outpouring of love and support doesn’t stop there. #TeamTessa has been circulating on social media platforms like Facebook and Twitter, where Illinois teams continue to write positive encouragement for Sutton.

During an April 25 game between Notre Dame and Richwoods, fans helped donate as money from the concession stand was given to the Sutton family, and other donation jars were available for racing Dunlap / Peoria St. Jude.

“Every game Dunlap attends I feel like someone is doing something whether we’re there or not. We have other parents reaching out to us and letting us know what’s going on,” Michelle said. “(Tessa) knows a lot of girls from other teams because of club football, but there are teams like Streator, Normal West and Normal Community that we don’t know anyone about and they will text and message us with registrations for Tessa.

Normal West showed their support for Tessa by praying with Dunlap’s side in midfield following the Eagles’ 3-1 win over the Wildcats in early April. As the season continues to move forward, the teams continue to show that they are all in Tessa’s side.

“We’re blown away by this and never would have expected it,” Michelle said. “(Tessa) has several girls in the Dunlap team that she is extremely close to and reaching out to her, as well as girls from her club’s football team.”

Dunlap coach Peter Cenek and his team prepare for the playoffs, led by captains Sammi Cenek and Lily Sutter. They have Tessa in the lead every game.

“Almost every team we’ve faced this year has honored her in some way. Whether they’re wearing a color patch or a specific headband, most teams will wave to her,” said the coach. “It’s been amazing with the level he’s been brought to. It blew us away as a program, and I know it blew the Suttons away with all the support across town.

“We play for Tessa”:Dunlap’s football draws strength from teammate’s battle with cancer

Dunlap’s girls’ soccer team has a team ritual that includes wooden signs that read “Play for Tessa.” One that is located near the locker room door that every coach and player touches before exiting. The team take another “Play for Tessa” sign to walk away. Players and coaches hit it before running onto the field.

“It’s a great way to remind us of her and why we’re playing,” Cenek said. “I preach to girls a lot that this is family, and what happened with Tessa over the last year has made us family.

Cenek described Tessa as a highly skilled “quiet leader” and “true teammate” who loves being part of the team. Cenek said the team quickly respected Sutton when she joined the team as a rookie because she did all the little things that helped them win games.

“The whole diagnosis was very difficult for her, because she doesn’t like being in the spotlight. It was hard for her to approach, but I think she has improved a lot now,” Cenek added. “She’s always that quiet leader, and she has some really funny jokes that will blow your mind.”