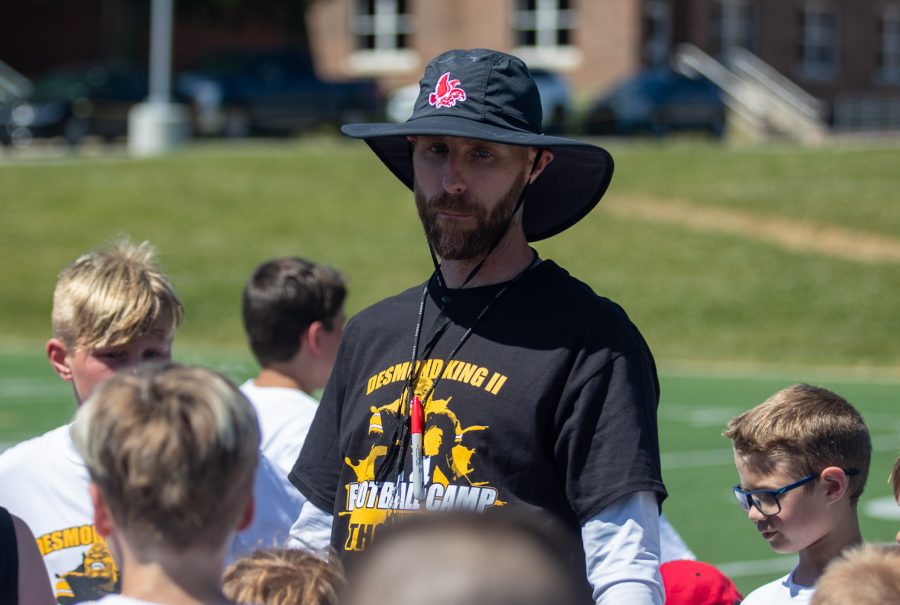 The last time the Iowa City High School football program was run by a first-year Little Hawk head coach was 20 years ago. Now, Mitch Moore is taking over, seeking to reinvigorate the historically successful program.

The City High football program has not seen a winning season since 2016. The program won its last Class 4A State Championship in 2009.

Former head coach Dan Sabers retired after the 2020-21 season. The Sabers have spent 40 years in the Little Hawk football program and the last 20 as the head coach of City High. In his last season with Iowa City high, the Sabers went 2-5 in the shortened season.

Now Moore thinks it’s time to get the program back on its winning track. It’s a challenge that he says excites him.

The City High position is Moore’s third stint as a head coach.

He was previously on the Iowa State coaching staff from 2013 to 2017, starting as a graduate assistant. In 2016, he was promoted to Director of Iowa High School Relations and Deputy Director of Scouting.

Moore took up his first head coaching job at Greene County High School in Jefferson, Iowa, for the 2017-18 season.

Moore stepped forward in 2019-20 to his second head coaching position at Class 4A Roosevelt High School in Des Moines, Iowa – a program that had not reached the playoffs since 1996.

Moore led the Roughriders to a playoff appearance in his debut season of 2019-20, finishing 6-4.

â€œI would say to each person, just the genuine relationships that I build with the kids and that our coaching staff build with the kids,â€ Moore said. â€œI’d rather know what makes a kid tick, what makes a kid the best version of him, than teaching him to run backwards or quarterback. I think it’s a lot more intriguing to me and we’re going to get a lot more out of the kid if we know we have a great relationship with them.

Relationships cannot develop because everything is always easy, Moore said. Thus, the struggle, the sacrifices and an excellent communication with his athletes help him to build his programs.

Moore has led his athletes through summer training and he said the seniors want to change the narrative of their past seasons.

â€œWe’re an organized program and we’re detailed and there’s a lot of energy around our program,â€ Moore said. â€œAnd I think that’s the most important thing I want people to remember. That it’s not just false enthusiasm, it’s detailed energy. We like to say that we are an organized chaos. And during practices we organize the chaos so that when we get to a game we can play fast, we can play fun, we can play loose and we are going to attack the football from both sides of the ball.