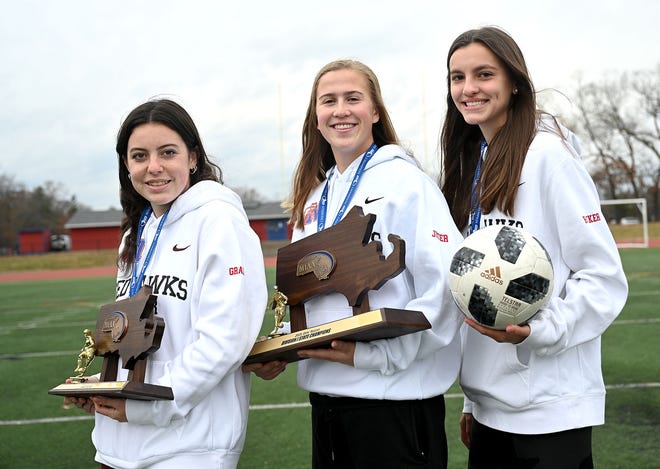 NATICK – Dave Wainwright wanted to gauge expectations. He wanted to take the temperature of the room.

So, during training after her team’s second game of the season in mid-September, Natick High’s women’s football coach asked her team a simple question: Do you believe we can win a championship? of state?

“They got the honest answer we don’t really know,” Wainwright said.

“We wanted to say yes, but we needed the work,” Natick senior captain Allison Jeter said.

After the meeting, Natick put his pen to the field. The Redhawks lost just one game in the regular season and won the Bay State Conference title.

Then, after winning each of his first five playoff games, sixth-seeded Natick beat seed Hingham, 3-2, to secure a Division 1 state championship.

The victory marked the first state title in the history of the program.

“(The coach) said ‘Don’t expect anything, win it all,’” Jeter said. “So we definitely lived through it. I don’t think anybody really expected us to be in the final.

The last time the Redhawks found themselves in a Div. State 1 final took place on November 17, 2018. That’s when Natick lost to Wachusett, 1-0, on penalties on a cold evening in Lynn.

Jeter, then a freshman, started as a goalie that night. She and the team were joined by two other ninth grade students Briar Grady and Kyra Hacker. Fast forward three years: All three were senior Redhawks captains this fall.

So, winning a state championship brought some reward for the talented trio – and a sense of relief.

“We wanted to go back,” said Hacker, who plays center. “We really wanted to win this time around instead of just holding a runner-up trophy.”

“We had all of our old teammates and all the seniors when we were in first year, reached out to us and said ‘We are so glad you did that’ and we were like ‘We did this for you’ , said Grady, a central midfielder. “We wanted this so badly and we went out and got it.”

Natick (17-1-5) took victory after victory in the regular season. The Redhawks beat league rivals like Brookline in the “Battle of Route 9 Cup” and Framingham in the “Wheeler Cup” before suffering their only loss of the year on October 28 against Wellesley.

After that, Natick didn’t lose anymore.

In the playoffs, the Redhawks won five straight games – including a pair of 2-0 wins over No.3 Acton-Boxborough and No.2 Bishop Feehan – before defeating Hingham in the division. 1 state final on November 20.

As the final whistle sounded in the state title game, the Redhawks contingent rushed into each other’s arms in celebration.

“Kyra was my first hug, and then I think Briar and I had maybe a (a minute’s) hug, just in each other’s arms,” Jeter said. ” This is the dream ; it takes four years and a lot of blood, sweat and tears.

“I didn’t want to let go because to think this was the last time I played for Natick soccer was really emotional,” Grady said. “It was just amazing.”

After Natick’s squad of players and coaches collected their medals and trophies, they boarded the team bus to Whitman-Hanson High School to make the nearly 40 mile journey to go back home.

Natick’s Police and Fire Departments were waiting for them, who provided all the bells and whistles to escort the high school. All the footballers banged their hands on the side of the bus and sang Queen’s “We Are the Champions” at the top of their lungs.

“It was a really surreal moment,” Jeter said. “Seeing all the engines go out and that was a ‘we did it moment’ and the odds were stacked against us, and the whole town was celebrating and of course we were the champions.”

For Wainwright, this fall has been an unlikely trip for his team. They went through their fair share of peaks and valleys but – in the end – the Redhawks finished in the lead.

And his three top captains were a big reason why.

“These three obviously made me feel like I know what I’m doing,” Wainwright said.

What the Natick High women’s soccer team did this fall was make history – while also getting some redemption for what happened three years ago.

“We knew we had the chance to come back here,” Hacker said.

“I (imagined) from the second I was called out to college that we would have that state championship trophy at some point,” Jeter said. “So I’m glad we did this this year. ”

“Winning the state championship as a senior – it feels like your high school (experience) is over,” Grady concluded.

Tommy Cassell is a senior multimedia reporter for the Daily News. He can be contacted at [email protected] Follow him on Twitter @ tommycassell44.