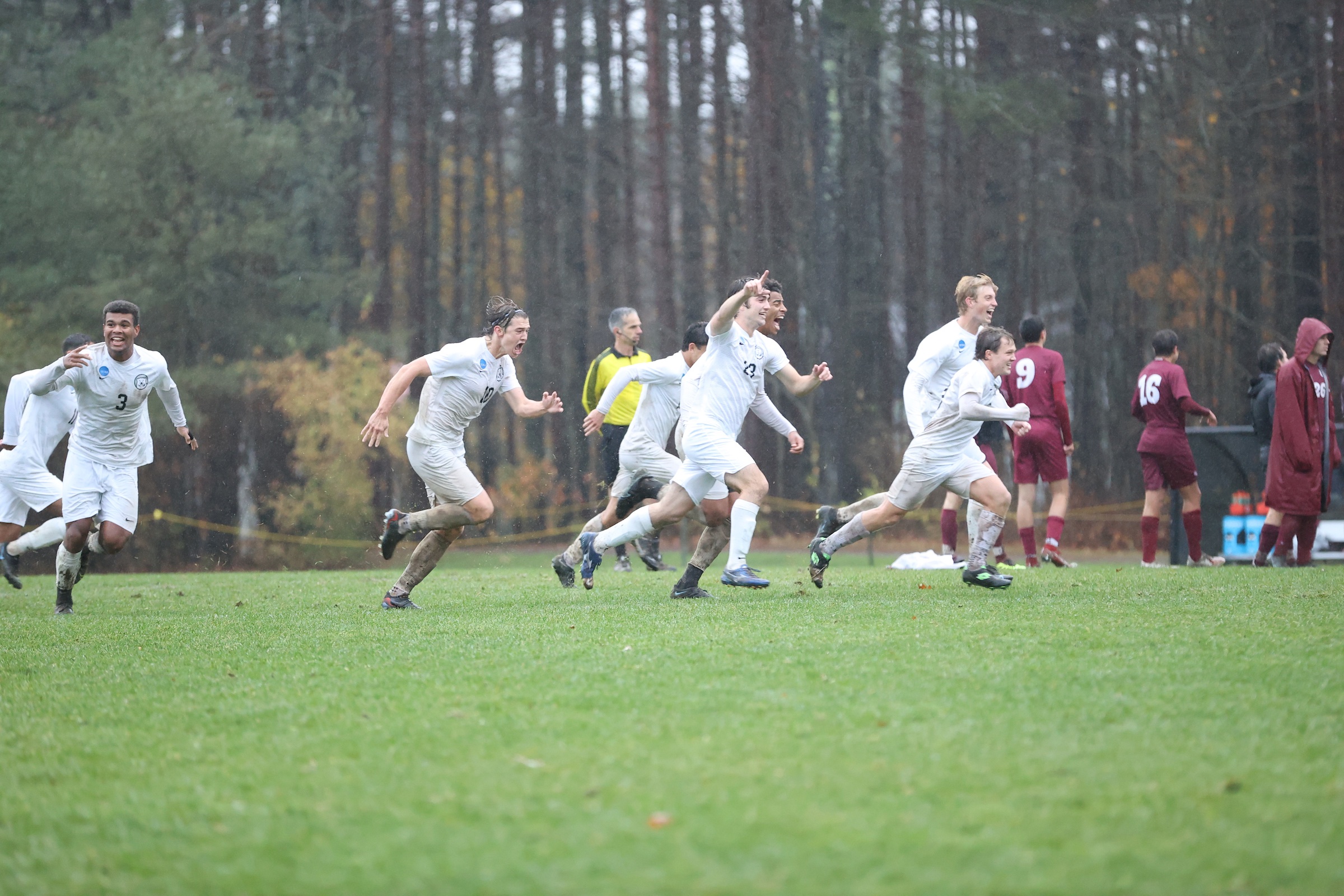 All eyes were on the third-ranked men’s soccer team (12–1–5; 6–1–3 NESCAC) last weekend as they hosted the first two rounds of the Division III tournament of the NCAA at Pickard Field. Bowdoin defeated US Merchant Marine Academy (11–5–6; USMMA) 3–1 on Saturday, then faced Vassar College (9–3–7) on Sunday. Vassar’s game was deadlocked 1–1 after 110 minutes, but Bowdoin edged Vassar 4–2 in penalties to advance. Bowdoin will face SUNY Oneonta (15–2–3) in the third round of the tournament tomorrow. This is the second time in the program’s history that Bowdoin will appear in the third round of the tournament, the first time in 2010.

“USMMA and Vassar are very good teams, and they pushed us in a way that we try to prepare for, but on game day there are always wrinkles to deal with,” Wiercinski said. “We wanted to be aggressive and play on the front foot. We were able to do this most of the time throughout the weekend.

Sunday’s tie was reminiscent of Team NESCAC’s elimination to Connecticut College, which also ended in a penalty shootout. Goaltender Michael Webber ’23, who stopped two Vassar shots on goal, believes the similar experience in the Connecticut College game – and focusing on it in practice afterwards – helped the team succeed against Vasar.

“We lost to Connecticut College two weeks ago, and I think we all saw that we needed practice with [penalty kicks], so we spent the last week and a half preparing,” Webber said. “We really had the energy coming out of extra time, and we came to the bench and said, ‘This is our game to win at this stage. “”

The shootout wasn’t the only hurdle the team had to overcome on Sunday. The constant rain and mud proved difficult for the players.

“I think the double weekend and the weather had a physical impact and changed the way the game went on Sunday,” captain Harry Cooper ’22 said. “But at full time, in overtime and on penalties, I think everyone was ready to find a goal. We may have been a bit cold too, but it’s good motivation to score and get back to the locker room.

Fan support has helped the team stay motivated and energized.

“I think one of the coolest parts of the game was having 50-60 students and fans all lined up right off the pitch, and there was great support and good energy from everyone there. “said Webber. “When you win, they come crashing down the pitch with you, which is fun.”

Neither player had competed in the NCAA tournament before, which meant they had to overcome some nerves in the weekend’s opener against USMMA.

“I think one of the toughest factors was the build-up to the weekend,” Cooper said. “The anticipation of hosting an NCAA game kind of built up before the weekend, and I had to focus on another game. I think that ended up helping us because we were able to bring energy into what turned into back-to-back matches.

Webber added that the team grew more confident as the weekend progressed.

“The second half of the first game had a lot more energy than the first. [half], and that energy came from acceptance,” Webber said. “You’re one less and you don’t want the season to end today… So what can you do to understand?” We’ve done this before.… We’ve been back several times after losing our minds. Then we scored three goals in the space of 25 minutes in the second half which was exciting and definitely a relief.

The Polar Bears look forward to competing again this weekend. If they beat SUNY Oneonta on Saturday, they will play the fourth round of the tournament on Sunday.

“We’re training this week so we’ll be strong by the weekend,” Cooper said. “There’s definitely good energy and mentality in the team at the moment, so we’re trying to focus on how we want to play to win.”

Wiercinski is confident his team is up to the challenge.

“The guys work hard. Some rest and recover, but we’ll be ready to give [our opponents] everything we have,” Wiercinski said.

Bowdoin will face SUNY Oneonta at Amherst College tomorrow at 1:30 p.m. in the third round of the tournament.