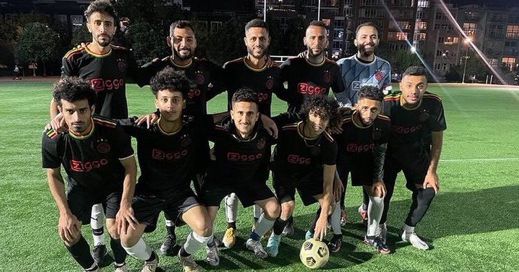 The winter was long in these regions. Despite a few exceptions, football in the tri-state area ended for 2021 after the guys across the river won the MLS Cup. It’s been cold and depressing for everyone, especially the New York Red Bulls fans. But the end is in sight and the 2022 pre-season should already start this weekend. But football in New York is also returning in other forms and outside of the professional spectrum.

The amateur game is still being played whether you know it or not. The harsh local winter can keep teams away from the field, but they come back fairly quickly. If you thought the MLS offseason was short, you ain’t seen nothing yet! This includes leagues, league cups and major zone/region tournaments.

Over the next few weeks, I’ll be reviewing some of the best upcoming contests the local lower leagues have to offer in the near future. I can’t get you to attend these games, but hopefully I can pique your interest enough for you to look into it. Maybe give a follow to a team on social media or go on your own.

Although there are many options to start, I think the best option might be the one that starts this weekend. The Cosmopolitan Soccer League may be on hiatus, but the nearly century-old organization will stage its two league cups over the next few weeks. While tournaments normally don’t start until January and end in the summer, the CSL opted to play both more than five weeks before the league season resumes.

The format is quite simple for the John Kilby League and the Harry J. Saunders Cups. The participating teams are divided into three groups and will compete over two to three match days: January 23, January 30 and February 6. The top team from each group and the second-highest ranked team will advance to the knockout semi-finals. -finals on February 13. The Cup finals will take place two weeks later on February 27. All of these dates are weather dependent as it is still winter in New York.

The league’s Over 30 Cup will also take place on these dates for anyone interested.

The Cosmopolitan Soccer League’s main league cup, named after former chairman John Kilby, will play its 33rd edition this year. The competition is open to teams playing at all levels of the league pyramid, including first and second division reserves. This year, nine teams were split into three groups for the round robin. Since there are fewer teams, there is a chance that the knockout stage will start a week earlier.

Reigning champions Borgetto FC are top of Group A. Head coach Ivo Mohorovic’s side have just enjoyed a treble year in 2020/21, winning the league’s Division 2 title and the Ryder-Vass tournament under 23 years old. This year’s No. 1 team currently sits in third place, with striker Angelo Bordenca one of the league’s top scorers. They are joined by Manhattan Celtic II (Division II) and Desportiva Sociedad NY Reserve (Division 2 – Reserve) in the group. While Celtic’s first team were promoted to the Eastern Premier Soccer League last year, the former reserve team opted to remain in the CSL as Celtic II. This also means that there is a Manhattan Celtic II reserve team in the reserve league. Do whatever you want with it.

Group B is similar to the first with a first team to headline alongside two reserve teams. Hoboken FC 1912 are currently undefeated in CSL Division I (8-3-0) and sit in second place. With the likes of James Reed (eight goals), Aitor Hernandez (four goals) and Kevin Bzdek (four assists), it might come as a shock that the unit is actually more known for their defense. Head coach Steve Korfiatis’ defense has allowed just four goals in eleven games, the fewest by far in the entire Premier League.

They will be flanked by reserve New York Shamrock SC and reserve Borgetto FC (both from Division 1 – Reserve). The Rocks are coming off a double last season after winning the Division 1 and Reserve titles. This year, the reserves are also leading the standings at the break.

Group C is probably the most interesting of the group because it has two reigning division champions. The aforementioned New York Shamrocks SC (Division 1) can hope to win the cup for the second time in their history (2017-18). But so far this season, the group hasn’t gelled well in the top flight. An early four-game winless streak seemed like a typical hangover mixed with roster issues that are exacerbated by COVID-19. But a solid six-game unbeaten streak pushed the Rocks back into the top four heading into the break. A solid showing in the cup could line up the team heading into spring.

The other title holder is New York FC International of Division 2. After winning the Northern Conference and Division 3 playoffs last season, the league’s social media darlings got busy. With a record of 6-1-2 at the break (with one game less due to a very understandable postponement), NYIFC is positioning itself to enter the title race this spring. The defense is one of the best in the division, tied for second with just eight goals against, with just enough offensive talent to get away with three points in most games.

The last team in Group C is Desportiva Sociedad NY (Division 2). They are currently ninth in the division (2-1-7 record) and face relegation if they don’t put distance between themselves and the bottom two. It’s hard to see them making a mark against the Rocks or NYIFC, but strong performances could give the team momentum toward the league roster.

Despite being the secondary league competition, the Harry J. Saunders Cup is still not an easy title to win. The competition is named after Harry Saunders, whose resume includes being league president, president of the Upstate New York Association, president of the New York Hota Bavarian SC (National Challenge Cup champion in 1971) and inducted into the National Soccer Hall in 1981. of glory.

As it is only open to Division 2 – Reserve, Division 3 and Division 4 teams, the list of competitors can vary widely. However, it also means plenty of opportunities for lower division teams to make a run, battle it out against higher level competition and possibly win their premier league honors as well as prize money. This year, the twelve teams will be in the game with a majority from the very substantial Division 3.

Group B is led by New York International FC Reserve (Division 2 – Reserve). As the only D2 reserve team in the competition, NY International could be considered one of the favorites to win the whole thing. Head coach and player Christopher Minty helped lead the team to third place in the D2 reserve table, but that also includes a two-game losing streak heading into the winter break. His team, including goalkeeper Zack Wertheim, could falter in some of these games. But using competition against lower division teams might be the best way to prepare ahead of the spring schedule.

The rest of the group includes Central Park Rangers Black (Division 3 – Central), Desportiva Sociedad NY City (Division 3 – East) and LaLiga Academy NY (Division 4). All three are currently either in the middle or lower parts of their respective charts. It’s worth noting that while LaLiga’s roster is mostly made up of young talent, there are some notable exceptions. Iván Cifuentes, a former Spanish pro who won a Segunda División B title with Albacete Balompié B, made some league appearances for the side last fall.

Finally, Group C includes Brooklyn Bound SC (Division 3 – Central), Laberia FC (Division 3 – East), Tibet FC and Yemen FC (Division 3 – Central). Of the group, Tibet FC is actually a new team that only joined the CSL last week. As an arm of the Tibetan and Himalayan community in New York and New Jersey, the team will likely be an extension of the group’s already existing youth soccer program and kick off their first-ever game against Yemen FC. Labëria FC, named after the Albanian professional football team of the same name, are the defending Saunders Cup champions after beating Sons of Queens 3-0 in the 2021 final.