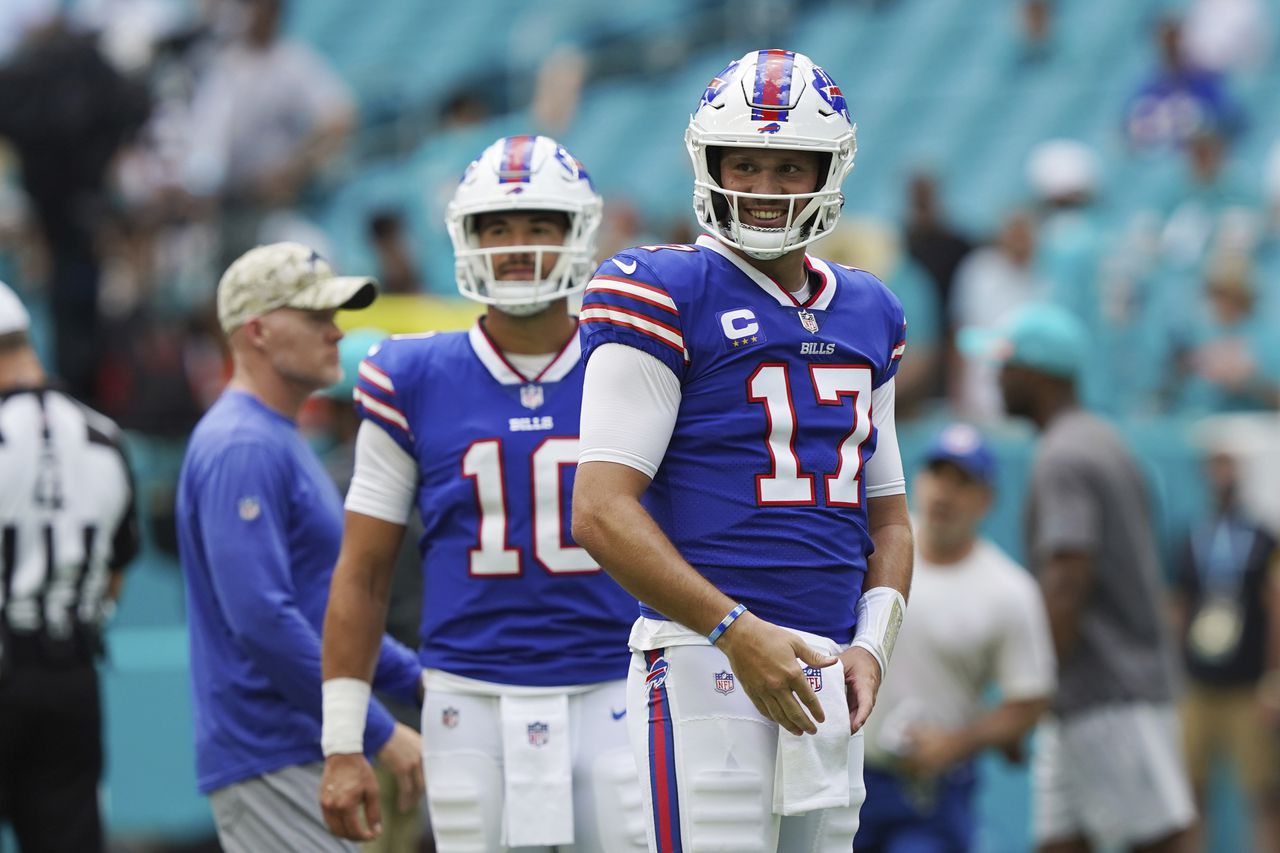 Miami Gardens, Florida – The Bison Tickets offensive line took a lot of heat last week after a Week 1 loss at home to the Pittsburgh Steelers.

Left tackle Dion Dawkins, who still gets his 100% conditioning after a fight with Covid-19 early in training camp, said the unit took it personally when struggling poorly in a group. Things were looking better this week after a 35-point shutout by the Bills in Miami. But Dawkins said there was more work to be done.

Bills quarterback Josh Allen answered a question about Tua Tagovailoa who left the game in the first quarter with bruised ribs and quickly pivoted after he was done defending his guys up front.

â€œWe changed things yesterday in our racing game, put in some new games, and our guys rolled around with it and found a way to go out there and apply it,â€ Allen revealed after the game. . â€œBeing a lineman is by no means easy. There are so many different balls flying towards you. Sometimes they get blamed when they really shouldn’t. People don’t know our blocking patterns or our running patterns and where our adjustments are supposed to be and stuff like that. Again, these are my guys.

Allen was sacked three times last week by the Steelers, but only once this week against Miami. The Bills kicked off their running game, with Allen handing it to Devin Singletary and Zack Moss 21 times in the game. The two full-backs combined for three touchdowns.

The game plan tends to shift over the course of the week as teams prepare for their opponent. Especially with a division opponent, where the two teams involved know each other so well, the game plan could change during the game itself. Allen said the coaching staff saw different things on Saturday and decided to make the necessary changes.

â€œJust new things in the game plan, coaches see different things,â€ he said. â€œAgain, we don’t really have a say in what’s going on. I think I have the most to say, but I still don’t have much to say. No matter what they put in, we have to make it work. It’s our job to go out and perform.

Dawkins said last week his body had gone through a “dramatic tragedy” when he felt he might not come out of it during the most difficult days of Covid symptoms. He must have had the worst times in the hospital and when he returned to the field he could barely walk up and down the stairs without running out of steam.

He had three detention penalties last week but only had one this week against the Dolphins – and that one was not enforced due to a Miami penalty on the same play.

Dawkins said when games were as late as Saturday it made it tough, but the Bills have professionals on their offensive line, he said.

â€œWe’re learning to handle it and we’ve got a great quarterback and some good offensive guys who make it easy for us,â€ he said. “They’re up there and they – well, I think the quarterbacks are the smartest guys in the building.” When they can just put in little hints like, “Alright guys, this is what we do”, that’s cool. And that’s exactly what Josh did to keep us all with that right foot forward. So, hats off to Josh.

The Bills are now 1-1 with a division victory in their pocket. Allen threw a pair of touchdowns but only completed 51.5% of his passes for 179 yards. He said the offensive as a whole is still trying to find pieces that it likes.

â€œOur receivers are comfortable with some of the tricks we did in the second half. I know I was, â€Allen said. Three of the Bills’ second half practices resulted in touchdowns. â€œI’m not saying I wasn’t at the start, but we had other game plans to try to put in place.

“Hats off (the dolphins),” he continued. â€œThey have some really good players there and they made some really good plays today. But there are some things that we need to improve in terms of communication and that starts with me. There is going to be a lot to learn about this tape. Again, winning like we did feels good.

Greg Rousseau shines on return to Miami as Bills shut out Dolphins (11 reasons to be cheered on, 1 reason to worry)

Make sure to check out and subscribe to “Shout!” The Buffalo Football Podcast â€with beat writers Matt Parrino and Ryan Talbot.