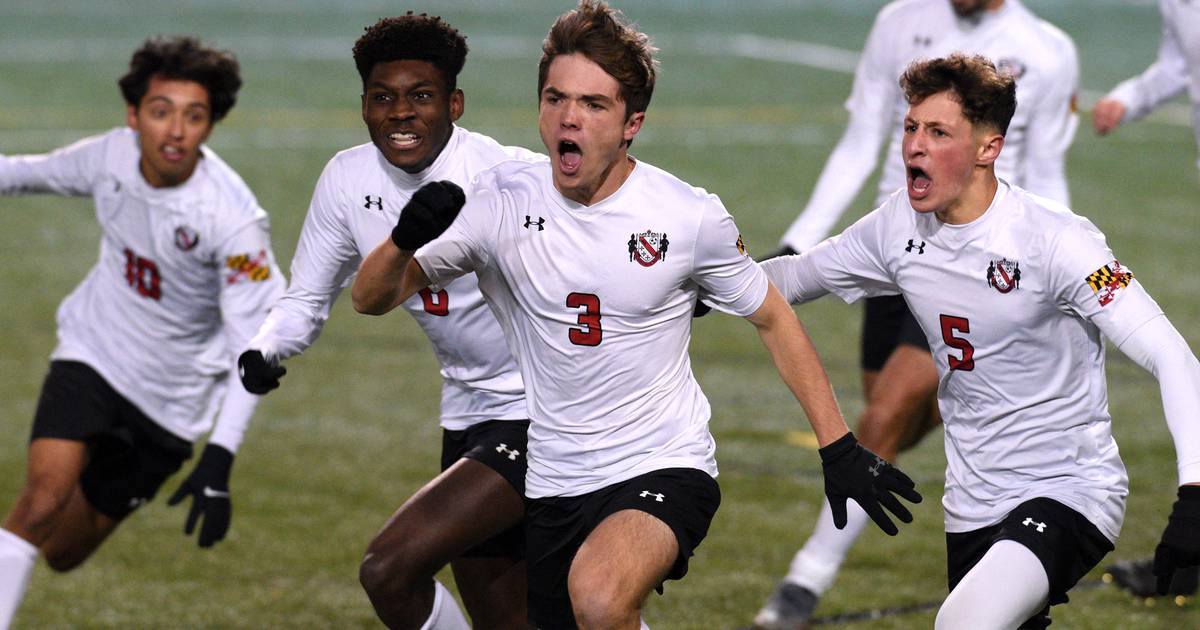 In between, the No. 13 Gladiators played deep and effective football, ultimately resulting in a 2-0 win over the No. 11 Hawks that produced the program’s third state crown and first since 1997.

In 2019, when the university finished with a win, Glenelg saw promise in a freshman class. After a state semifinal appearance last season, it all came together for the Gladiators, culminating in Friday’s strong team performance that exemplified the program’s ascent.

“It’s a special group. We knew four years ago that this senior class – when they came into first year – we saw the potential was there,” said Glenelg coach Joey Osborne. “And it’s one of those that has potential is one thing, but you have to stick with it. The fact that they built it and got to where we are today, that’s their testimony. They’ve put in a lot of work over the last four years as a group, individually and the growth just kept coming. To be able to make it happen like it is today – ending by a state championship – we couldn’t ask for anything more.

Knowing this was their opportunity, the Gladiators (12-4-1) came into Friday’s game at Ridley Athletic Complex in Loyola Maryland with a sense of urgency that provided them with early scoring chances.

Sines made sure the gladiators were rewarded.

Eshan Beg headed a served ball from the left side which was deflected by North Harford keeper Michael Lawry, but the rebound came to Sines, who buried a chance from 6 yards out.

The goal, which came in the ninth minute, came shortly after Sam Kersh hit one from 8 yards out which was aimed inside the far post but was cleared from the goal line by Hawks defender Matt Siedlecki .

“I know we have to start the tempo well, score a goal early,” Sines said. “So when I saw Eshan head the ball the keeper saved him and he came and bounced off me, I was just trying to make sure I got over him and crushed him as hard as I could, pass in front of the keeper and in the back on the internet.”

The Hawks, who had their own storybook season making the program’s first appearance for the state title, adjusted at halftime and showed urgency in the second half. Top scorer Ben Wardle’s left-footed shot from 14 yards went wide past the far post early in the half. Midfielder Kian Pucher, strong throughout the game, fired a quick shot from 16 yards and also went wide with 8:10 left.

The Gladiators defense did its part, with goaltender Joey Samsock having to make three routine saves.

With 7:11 to play, midfielder Roman Farace was brought down in the box. Sines sent the penalty high into the left corner to make it 2-0 and seal the win.

Glenelg standout striker Siji Jolayemi, who had a 10-goal, five-assist senior season and was in college during that one-win freshman season, took a look at the plate of the championship which lay next to him and was surprised.

“It all still feels unreal,” he said. “I don’t know if I even have a real sense of what I’m feeling. I have to let it settle for a bit before I can express my feelings.

“We knew this was the year. Last year we got closer and this year as the season went on we had some ups and downs, games that we thought we had to win and we knew we had to learn from those games…we’ve been able to move on and learn something from every game we played.

The Hawks (15-3-1) have the most mileage of any season in program history. Things didn’t end the way they would have liked, but the whole school supported them on their special trip.

Get the latest high school sports stories, photos, and videos from across the region.

Lane saw his Hawks play Friday with the same heart and desire his team has shown all season.

“We played this game as a family, we cry because it’s important and we made school history today,” he said.

Pucher was quick to credit Lane for the strong leadership he provided throughout the season.

“He came and made a difference,” said Pucher, who finished with seven goals and five assists this season. “He did something that no men’s football manager has ever done. [at North Harford] and I thank him. … I want to thank the guys in the team because they came to train every day, we all worked hard and we all had the same goal and we were a family.