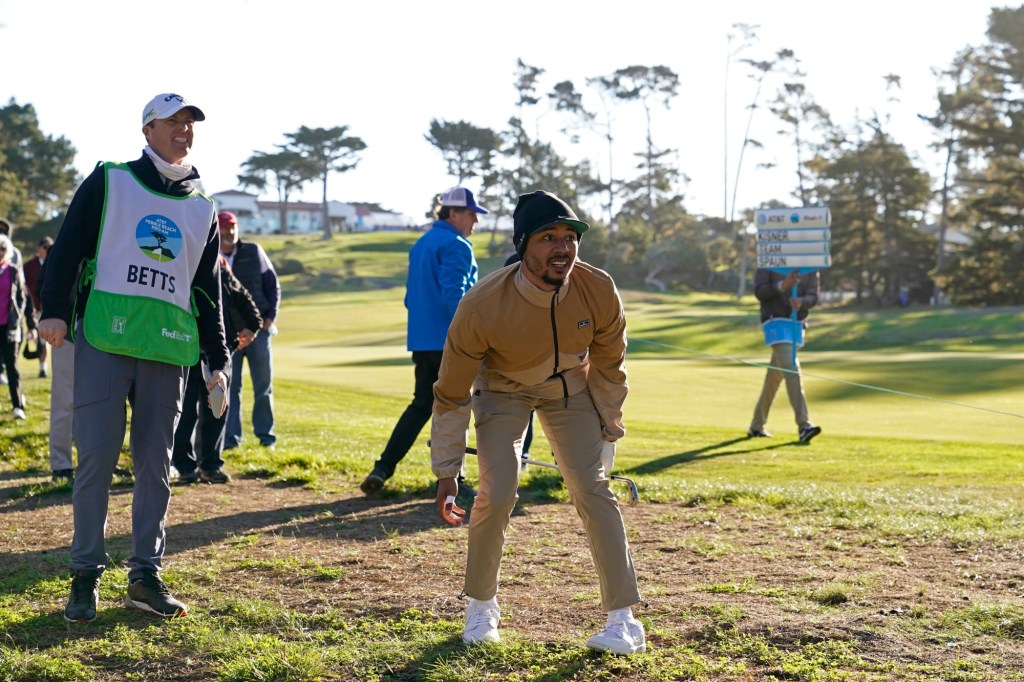 PEBBLE BEACH >> If there’s been a silver lining during this global pandemic, it’s the growing popularity of golf.

It’s not just among young people, but athletes in other professional sports, as well as celebrities, are getting into the game or just spending more time in it.

The reason is simple. Golf is a sport that allows people to socially distance, get out and stay active during uncertain times.

“We’re a reflection of what’s happening in the game of golf,” said Steve John, CEO of the Monterey Peninsula Foundation, which organizes the AT&T Pebble Beach Pro-Am. “We are getting requests from people to participate in the tournament that we never thought we would get.”

“Athletes like Canelo Alvarez have taken up golf,” John said. “It creates a more diverse field for us. We have a collection of athletes participating this year.

NFL players – past or present – have traditionally been a tournament attraction since 1970, when Jim Brown played in the event.

The past has also seen an ‘A’ list of NFL quarterbacks from Tom Brady, Aaron Rodgers and Matt Ryan of the Atlanta Falcons, as well as former Cowboys signalman Tony Romo and Hall of Famer and two-time champion. Super Bowl Peyton Manning.

“I don’t think there are necessarily more emerging football players,” John said. “It’s just more athleticism in general, all walks of life. People have learned the game of golf during the pandemic.”

Because the football season is largely over during the tournament, it made more sense to see their presence at the tournament, as well as the baseball players before spring training began.

As fans flocked to The Hay for a special exhibit putting the contest on Wednesday to catch a glimpse of former 49ers quarterback Steve Young and Arizona Cardinals wide receiver Larry Fitzgerald, several eyes and cellphones were focused on Hamm and Alvarez – two of the best their sports have ever seen.

Hamm, arguably the greatest female soccer player and a member of two World Cup championship teams, was a fan favorite at Wednesday’s event, along with Alvarez, whose popularity extends outside the United States.

“I’m blessed to have the support,” said Alvarez, who is 60-1-2 as a professional boxer. “I appreciate people.”

Hamm and Alvarez also brought a more diverse crowd to a larger-than-usual gallery that circled the 20,000-square-foot green.

The last professional boxer to feature in the tournament was Oscar De La Hoya in 2011, while Hamm is the first women’s soccer player to enter the ties since former USA teammate Brandi Chastian in 2010.

Both brought a refreshing touch to the event, with larger-than-life smiles and a humility that allowed them to fit right in with the gallery.

Athletes from other sports are usually the attraction during the week, as Fitzgerald and Young jerseys were on display at Wednesday’s sunny event.

Hidden behind that uncomfortable look of being out of their comfort zone was the adrenaline rush of sinking a putt and hearing a roar from a gallery that was as big as it gets. has had in recent years.

Celebrities have always been the biggest attraction at the Pro-Am since its inception 76 years ago. They steal the show.

If you have any doubts, just follow actor Bill Murray for a few holes. However, athletes in other sports are often considered anything but deadly. Golf tends to keep them from looking superhuman.

New faces mixed in with popular returnees in the amateur realm only widened the audience.

“We have maintained the tradition of celebrities and athletes, adding a few new names every year,” John said. “That’s what gets the excitement going. You cannot get it at other stops on the tour. We put on quite a show.

After record-breaking Supporters’ Shield campaign, Revs believe they have ‘a point to prove’ in 2022