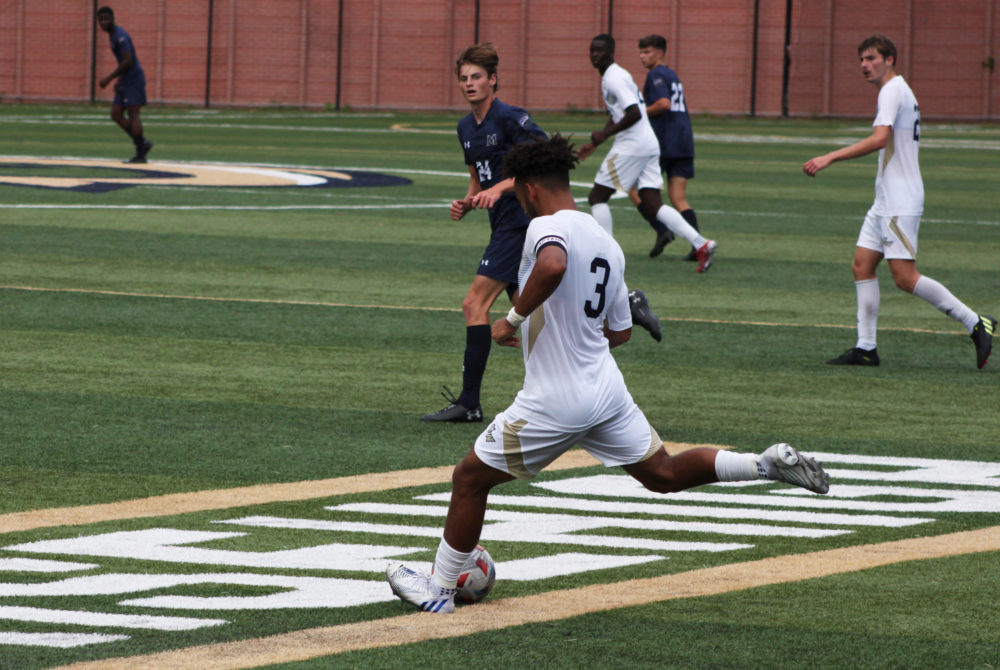 Head coach Craig Jones said the Colonials missed a chance to beat a top-25 side, giving the Dukes enough time on the ball to break through the box and score from close range.

After a confident 3-0 road win at James Madison University on Wednesday, the Colonials (5-4-2) were looking to secure their second straight conference win over the ranked Dukes (7-1-2). second in the Atlantic 10 and No. 24 in the nation. The A-10 rivals led possession as the Colonials played with a 5-3-2 formation, hoping to capitalize on the counterattack, but failing to derail their opponent’s offensive stride.

“They’re a good team, so we’re definitely not going to win any games if you allow two goals,” head coach Craig Jones said in an interview Saturday. “Well, so that was the biggest frustration, I think the game plan was how we wanted to set up. We knew we could get by if we needed to, and we try to do that.

The Colonials shot a .143 clip with five shots on goal throughout the game, but held off a solid defense anchored by senior goaltender Justin Grady, who recorded a .750 save percentage against 17 shots all by saving six, reducing the potential for a higher advantage for Duquesne.

GW kicked off the game with a shot from senior midfielder Elias Norris that ended up going over the bar. The Dukes responded with their own shot from the right of freshman midfielder Ask Ekeland that failed to enter the net.

The Colonials kept a second scoring chance when graduate student forward Oscar Haynes Brown fired the ball from the bottom right towards the net, but Domenic once again proved his dominance with a quick save.

GW took advantage in the 30th minute when senior striker Tom Cooklin placed a low cross into the box which junior midfielder Carter Humm kicked in to put GW on the scoreboard first. The momentum changed minutes later when a bouncing low shot from Cooklin nearly gave GW a two-goal lead, but Domenic prevented him from entering the net with a two-handed catch.

The Dukes’ offense regained ground in the box as the shots continued against Grady, who continued to deter a flurry of offensive attacks.

Duquesne leveled the score with three minutes remaining in the first half when junior striker Nate Dragisich led a counterattack 10 minutes after coming on as a substitution. GW senior defender Ryan Cedeno took the ball on the line and tried to cross it in the 42nd minute, but the Duquesne defense intercepted the kick. Dukes turned to attack the uncovered right side and found the back of the net on a right-footed shot from Dragisich that curled into the bottom right corner, leveling the score at 1–1.

The Colonials failed to score once again, entering the half with a draw.

GW kept their defensive advantage in the second half as Duquesne continued to knock on the door with shots coming from all sides of the pitch. The Colonials held them off until Duquesne struck again in the 62nd minute when second-year forward Maxi Hopfer headed in from a corner.

The cross swung past Grady’s hand and into the net, good for a 2-1 Duquesne lead.

GW struggled to increase their possession and break into the box in the second half, while Duquesne kept the pressure on until the final minute of the game. The teams showed more emotional frustration as the scoring chances dwindled in the final 10 minutes of the game, resulting in two yellow cards for the Colonials and the Dukes.

Head coach Craig Jones said the Colonials missed a chance to beat a top-25 team in the game, giving the Dukes plenty of time on the ball to break through the box and score from close range.

“We’ve talked about playing in the zone – it gives us clarity and gives us composure, but we have to step up and get into those moments where we’re overrated,” Jones said. “I think defensively we’ve done a bit of that, certainly with our midfield guys, we’ve bet a lot on dropping forward.”

Jones said he was pleased with the team’s efforts to challenge the opposition’s defense and is looking forward to seeing the injured players back on the field for Wednesday’s game against the UMass Minutemen.

The Colonials will be looking to bounce back on Wednesday as they host the Minutemen on the GW pitch. Kick-off is set for 1 p.m.

This article originally appeared in the October 3, 2022 issue of The Hatchet.