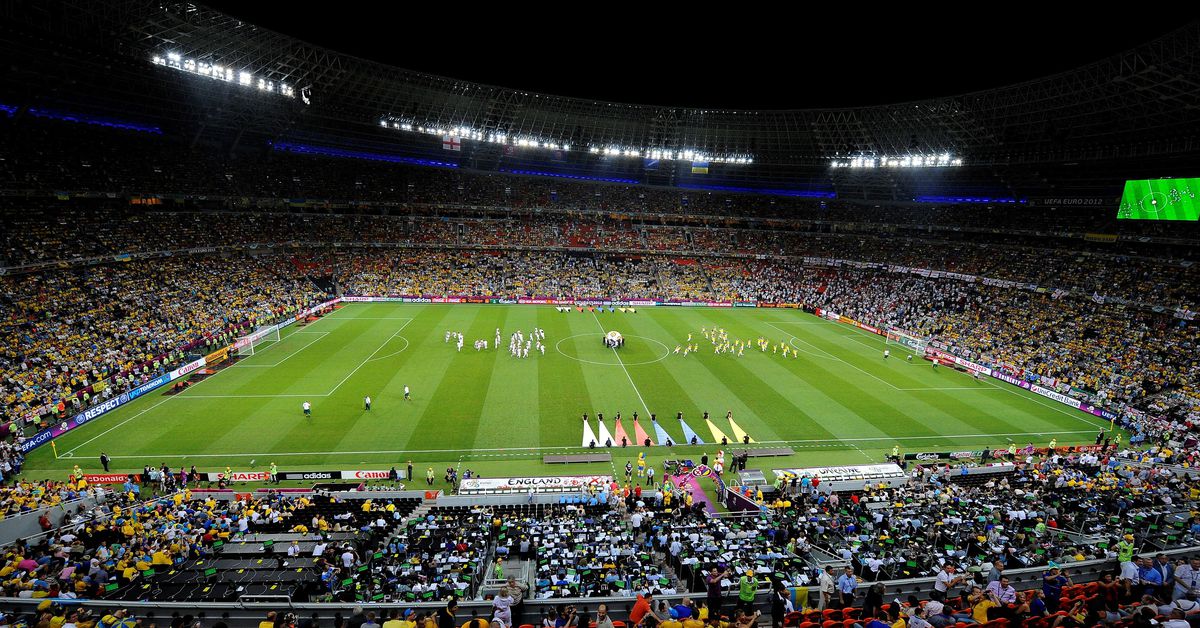 General view of Donbass Arena before the Euro 2012 Group D soccer match between Ukraine and England in Donetsk on June 19, 2012. REUTERS / Felix Ordonez

DONETSK, Ukraine, July 2 (Reuters) – Seven years after Ukraine lost control of this industrial city to heavily armed Russia-backed separatists who still rule Donetsk today, residents are divided over who to support during the European football championships.

The issue goes to the heart of the identity of the war-torn region, with some residents feeling closer to Russia while living in internationally recognized territory like Ukraine and others cheering on the Ukrainian national team. who are due to face England in Rome on Saturday.

Donetsk is now the capital of a self-proclaimed pro-Russian separatist republic carved out of the vicious fighting that erupted in 2014. The continuing conflict has killed some 14,000 people and displaced thousands more.

The European Football Championships have special meaning for many here who remember when Donetsk in 2012 hosted some of the tournament’s matches, including an England-Ukraine game which saw the English team triumph 1-0.

Sergei Rudenko, 45, was at this game and is still furious at what he said was the referee’s decision not to recognize a Ukrainian shot that crossed the England goal line.

Others are delighted at the prospect of a rematch between Ukraine and England reminiscent of more peaceful times.

“There are players from Donetsk in the (Ukrainian) team, so we support them,” said Andrei Salko, 52.

“I encourage strong teams. With the game approaching, we will be supporting Ukraine.”

Other residents changed their sporting allegiance after the region’s political transformation and supported the Russian national football team, not Ukraine, during the tournament.

Russia were eliminated by Denmark last month in a 4-1 loss.

“I was supporting Russia but they left the tournament,” said Viktor, a 70-year-old retiree. “Then I started to support France, but they too were eliminated.”

Rudenko said this year’s tournament made him nostalgic for 2012, the year Donetsk hosted Euro matches.

â€œWe had billboards, there were signs all over the roads, cars were honking. Now there are fewer,â€ he said.

The Donbass Arena, which once housed FC Shakhtar Donetsk, has not been used since the fighting began in 2014.

The conflict has forced the club to play far from home, and the area surrounding the once bustling 52,000-seat stadium is now empty and poorly maintained.

“Previously it was ready to host matches, but so much time has passed since no one has played there,” said Viktor, the retiree. “We don’t even know what’s out there anymore.”

The Ukrainian government, which wants Donetsk and the wider region to return, used the tournament to try to unify the country.

After Ukraine claimed their place in the quarter-finals with a spectacular overtime victory over Sweden, Ukrainian President Zelenskiy said Ukraine was a team representing 40 million people stretching from regions held by separatists east to Crimea, which Russia annexed in 2014..

Russia, which claims Crimea is part of its territory although it is still internationally recognized as Ukraine, opposed the jersey.

After Ukraine claimed a place in the quarter-finals, Zelenskiy and his ministers all wore the jersey at a cabinet meeting in a show of national unity.

Reporting by Sergei Kirichenko in Donetsk, Gabrielle TÃ©trault-Farber in Saint Petersburg and Margaryta Chornokondratenko in Kiev; Editing by Andrew Osborn and Emelia Sithole-Matarise