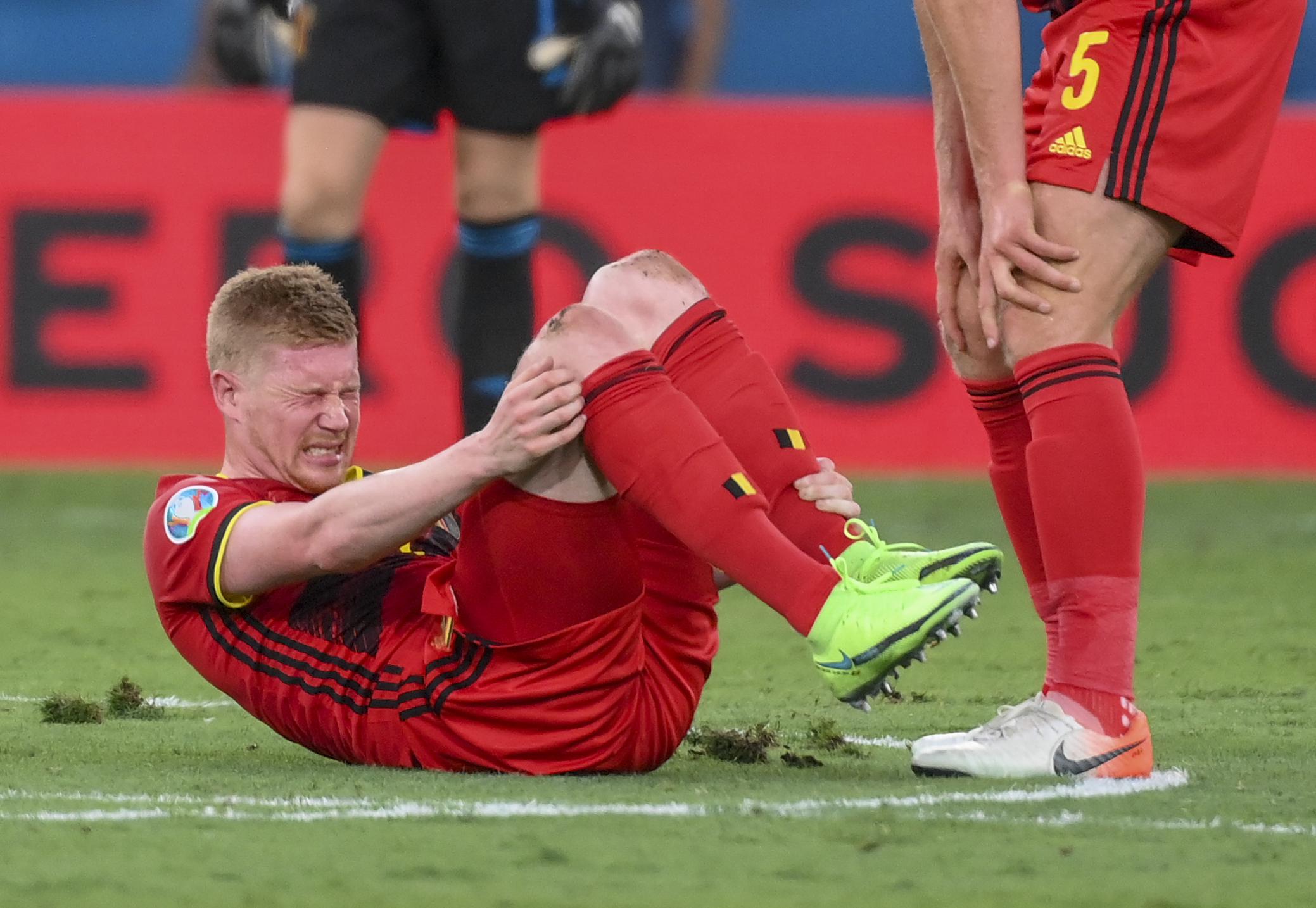 The latest news on the European Football Championship:

Kevin De Bruyne was substituted at the start of the second half of Belgium’s match against Portugal in the round of 16 of the European Championship.

De Bruyne has asked to be substituted due to an injury after being tackled from behind by a Portuguese player. He slowly left the field, limping a little.

De Bruyne had missed Belgium’s first game at Euro 2020 as he recovered from a facial injury suffered in the Champions League final.

Dries Mertens entered the match in place of De Bruyne.

France has a trio of injured players who will likely miss Monday’s game against Switzerland in the round of 16 of the European Championship.

France coach Didier Deschamps said defenders Lucas Digne and Jules Koundé as well as striker Marcus Thuram “are unlikely to be available” for the game in Bucharest.

Deschamps says Lucas Hernández should be able to play after recovering from a knee injury.

France must already do without striker Ousmane Dembélé. He was excluded from Euro 2020 due to a knee injury.

Tomas Holes and Patrik Schick scored goals in the second half to give the Czech Republic a 2-0 victory over the Netherlands at 10 and a place in the European Championship quarter-finals.

Dutch center-back Matthijs de Ligt was sent off for a handball in the 55th minute under pressure from Schick. The red card was followed by a video review.

Holes scored with a powerful header from close range in the 68th minute, then burst into the left of the penalty area and set Schick up for his fourth goal of the tournament in the 80th.

The Czechs face Denmark on Saturday in Baku.

Spain coach Luis Enrique said death threats against striker Alvaro Morata and his family should receive a “vigorous response” from the police.

Morata said he received the threats after missing several chances in the group stage of the European Championship. This included a missed penalty against Slovakia on Wednesday.

Enrique says threats should be the responsibility of the police “so that they can be the subject of a robust response.”

Spain captain Koke Resurreccion also condemned the threats and said he gave Morata “a big hug” to show his support.

UEFA has said rainbow flags are allowed at Puskas Arena in Budapest for the European Championship match between the Netherlands and the Czech Republic in the round of 16.

UEFA writes on Twitter that it informed the Hungarian football authorities that “the rainbow-colored symbols are not political and in line with the UEFA #EqualGame campaign”.

Hungary has faced strong criticism in Europe for a new law that will ban showing children content on LGBT issues. The government says it aims to protect children, but critics say it links pedophilia to homosexuality.

The Dutch government has been a vocal critic of the law.

Dutch captain Georginio Wijnaldum will wear an armband featuring the text OneLove and a multicolored heart for the match.

The Dutch football association launched the OneLove campaign last year to fight racism and intolerance in football and promote unity.

Cristiano Ronaldo will try to make even more of European Championship history when Portugal face Belgium in the round of 16.

Ronaldo already set the record for most career goals in the tournament and became the first player to score in five different European leagues. He is also tied with former Iranian striker Ali Daei for most goals scored for a men’s national team at 109.

Defending champions Portugal will face Belgium in Sevilla at the end of the Euro 2020 match. The Netherlands will face the Czech Republic in Budapest at the start of the match.

Around the Big Ten | women’s football