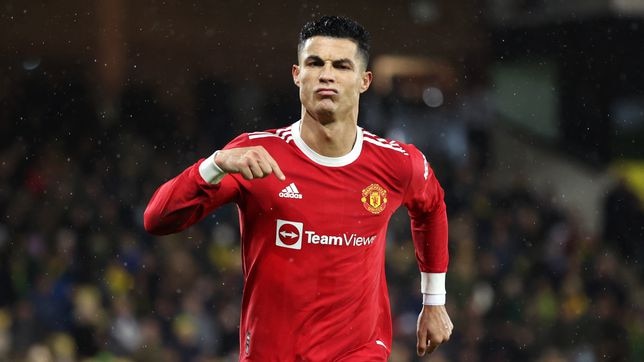 Cristiano Ronaldo has won the Premier League Player of the Month award for the second time this season after an impressive April on an individual level.

United’s woes this season have been well documented, with April being a particularly difficult month which saw them win just once in six Premier League appearances.

It would undoubtedly have been an even worse fate had it not been for Ronaldo’s five goals in four appearances, with the five-time Ballon d’Or winner scoring United’s equalizer in the 1-1 draw with Chelsea on April 28 and a hat-trick to just about see Norwich City 3-2 12 days earlier. His other goal came in a 3-1 loss at Arsenal.

My 2nd Premier League player of the month award, the 6th of my career. I’m as happy to win today as when I started, the thirst for victory and success never fades. Thank you to everyone who made this possible. 🙏🏽💪🏽 pic.twitter.com/euYaSsHlBG

No one in the Premier League has managed more goals without a penalty (five) than Ronaldo in April – those strikes came from a modest 1.8 expected goals (xG), underlining just how clinical the 37-year-old was.

A debate over Ronaldo’s suitability at United rumbled on for much of the season, some are of the view that his apparent lack of impact both off the ball and in the build-up play makes him a luxury an underperforming team cannot afford.

Ten Hag can use Ronaldo to good effect

However, his performances in April changed the narrative slightly, particularly after United confirmed Erik ten Hag as their next permanent manager on April 21.

Interim Manager Ralf Rangnick has suggested Ronaldo’s recent performances have shown he could be an asset to Ten Hag, with rumors surrounding a potential cooling off at the end of the season.

The Player of the Month award is further vindication of Ronaldo’s usefulness to United, as he joins Steven Gerrard on six such gongs in his career – only Sergio Aguero and Harry Kane have claimed more.