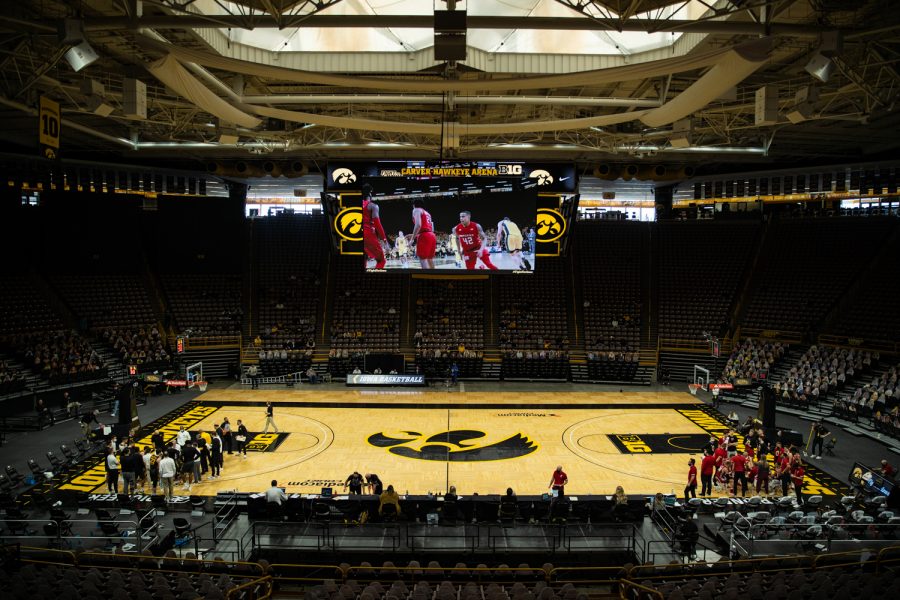 Eldridge previously served as the Hawkeyes’ video coordinator and director of player recruiting and development since joining the program in 2017.

Teams gather during a timeout during a men’s basketball game between Iowa and Wisconsin at Carver-Hawkeye Arena on Sunday, March 7, 2021. The Hawkeyes, celebrating senior day, defeated the Badgers, 77 -73.

Iowa Men’s Basketball announced Monday that Director of Recruitment and Player Development Courtney Eldridge has been promoted to assistant coach.

Eldridge will fill the position vacated by Billy Taylor, who left Iowa for a head coaching job with Elon.

Eldridge has been on the Iowa staff since 2017, first as the Hawkeyes’ video coordinator. The 41-year-old was promoted to Director of Recruitment and Player Development in 2019.

Eldridge specialized in film breakdowns, player development edits, and assisted the coaching staff with statistical data and analysis as the Hawkeyes’ video coordinator.

“I am grateful to [head coach Fran] McCaffery and [athletic director] Gary Barta for this opportunity,” Eldridge said in a statement. “I have been in Iowa City for six years and I know how special this community and this program is. I am thrilled to mentor the student-athletes in our program.

“I have had a relationship with Courtney for a long time,” McCaffery said in a statement. “He played for me at UNCG, was part of my team and has a great relationship with our players. He is a tireless worker, has great character and experience that will benefit our program.

The Iowa men’s basketball program has yet to announce plans to hire a new director of player recruitment and development.