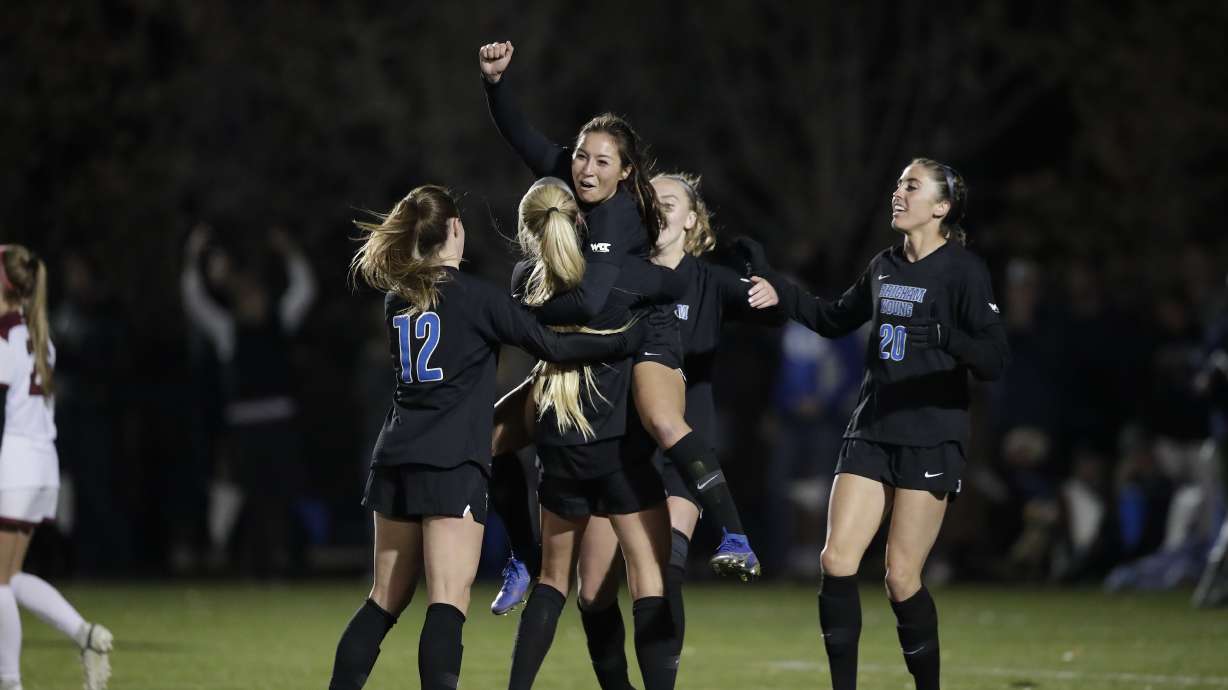 BYU forward Mikaylie Moore celebrates a goal against South Carolina in an Elite Eight game of the NCAA Tournament on Saturday, November 27, 2021 at South Field in Provo. (Photo BYU)

PROVO – Producing a result never before seen in BYU women’s soccer history, the Cougars have done what they’ve been doing all year: score first and score often.

The final appeal was almost anticlimactic, but the moment 27 years in the making.

Mikayla Colohan notched two goals and an assist, and Makaylie Moore also added a brace to lead BYU No.4 women’s football to a 4-1 victory over South Carolina in an Elite Eight game on Saturday night at the South Field.

Cameron Tucker and Brecken Mozingo each had two assists for BYU (17-4-1), which qualified to face West Coast Conference rival and defending National Champion Santa Clara in the NCAA College Semifinals. Cup on Friday December 3 at Stevens Stadium in Santa Clara, California. Florida State and Rutgers will play the other semi-final.

This is the first time since 2002 that the West Coast Conference has sent two teams to the College Cup.

“We are super competitive. We are ready to take on anyone,” said Colohan, the senior enjoying an additional year of eligibility offered by the COVID-19 pandemic after being selected by Orlando Pride at the time. of the 2021 NWSL Draft. . “And we’re happy it’s Santa Clara, we’re ready for them.

“And against whom would it be better to do this than our rival in the conference?” “

.@byusoccer_w already at the top thanks to an incredible game by Mikayla Colohan‼ ️#BYUwSOC#GoCougspic.twitter.com/f923KZCnwk

Blessed, proud and humbled were some of the words used by BYU coach Jennifer Rockwood to describe the historic occasion. But most of all, she was just excited – maybe even too much, as the incumbent head coach bowed under Colohan’s emotional weight in midfield.

“I’ve been here since I was 18 as a college student, and it’s been a long journey,” said Rockwood, whose team beat the Gamecocks 26-5. “It’s fun to see us finally reach the Final Four after all these years.”

Rockwood built the program from scratch, from a club program as a teenager to when he received NCAA sanction in the 1990s to the present day – arguably the largest in the history of the program. From All-Americans to conference titles, one goal had eluded one of BYU’s best team sports on campus: a place in the College Cup, and with it, a shot at a national title.

“I’m so proud of these guys and so excited for these girls,” Rockwood told BYUtv. “I hope we have two more games in us; we are delighted to go to Santa Clara.

“I think this team has really come together, and we are attacking as well as we are defending. We have very experienced players, the chemistry is fantastic, we have a lot of fun and we put everything on the pitch.”

In front of an overflowing crowd of 4,131 people at South Field that sold out less than four hours after tickets went on sale earlier in the week, the Cougars did what they always tried to do: score early and mark again.

The nation’s best offense put on a show for its home crowd a week after beating Alabama and first seed Virginia in Charlottesville.

“We were lucky to have another game on the schedule,” said Colohan, “and lucky to do it in front of our fans.”

Colohan scored the Cougars ‘first charge, snatching a loose ball from the Gamecocks’ 18-yard box and turning the clock before finding Moore for the first goal in the third minute.

But BYU didn’t sit back from there.

The Cougars outscored South Carolina 7-2 in the first 15 minutes, refusing to allow a shot on goal before Colohan doubled the advantage. Bracken Mozingo found Cameron Tucker in a wide space before the Lone Peak senior found Davis High senior wide open in the middle of the box to go up, 2-0 in the 15th minute.

Corrinna Zullo climbed behind the back line in the 40th minute, finishing her fourth goal of the season ahead of BYU goalie Cassidy Smith to bring the Gamecocks back to 2-1 at halftime.

It was the only shot on goal in the first half against BYU, which topped South Carolina 11-4 before the break.

ANOTHER FOR COLOHAN 🚨@byusoccer_w leads 3-1 with another score right out of the gate 💪#BYUwSOC#GoCougspic.twitter.com/f5I6fT80Ey

But what Rockwood called a “stupid mistake” at halftime only made BYU stronger. Colohan scored a second goal less than a minute into the half, joining Tucker and Mozingo again for the well-placed cross into the box which Colohan finished with ease.

Moore netted her brace in the 60th minute, completing a pass from Olivia Wade to give host, the Cougars, a 4-1 lead en route to their first Final Four appearance in program history.

The rest was just a formality as BYU limited the Gamecocks to a single shot on goal, passing the visitors 15-1.

“It’s a dream come true,” Tucker said. “We just played really well and our team played well together. We couldn’t ask for much more. The chemistry of our team is really amazing.