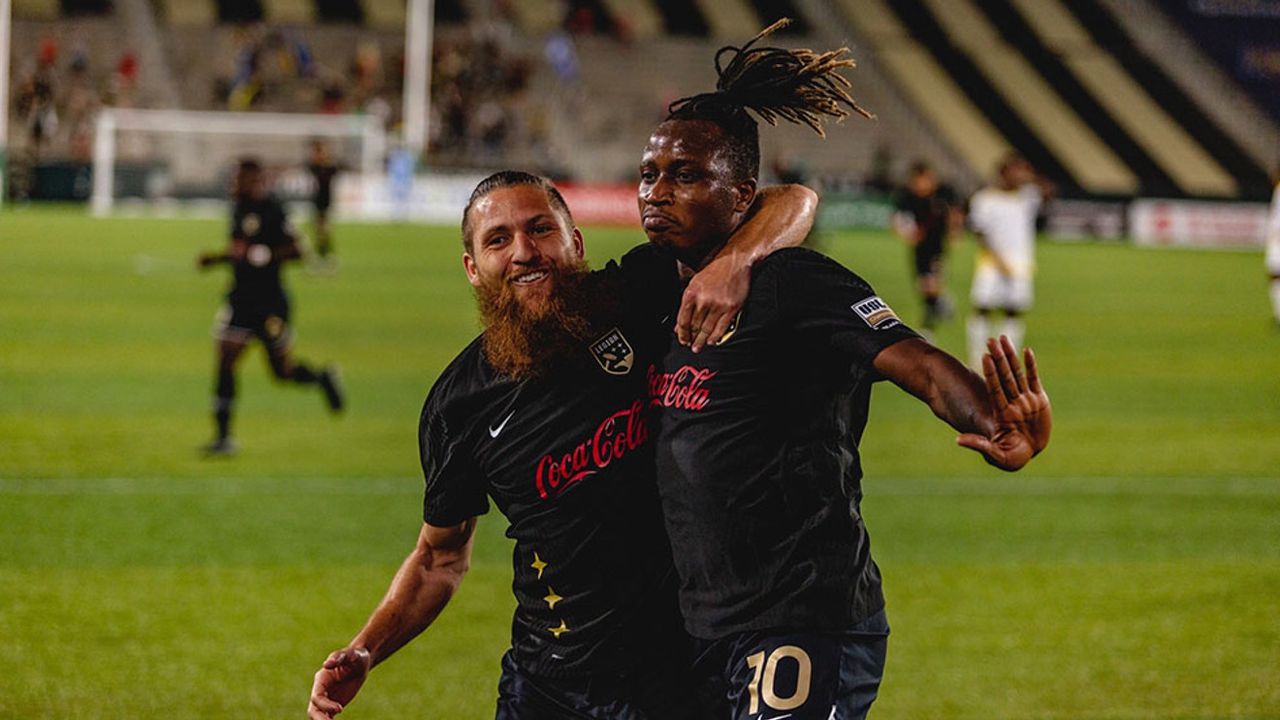 When Prosper Kasim was young, his mother didn’t want him to play football.

Helicopter parents in the United States direct their children to specific sports, but for Kasim, it wasn’t like that. He was banned from playing football because his family in Ghana was too poor.

He did it anyway.

Kasim may be soft-spoken, but he’s always been determined.

Talk to Kasim for a few minutes and ask the quiet 25-year-old Birmingham Legion FC player to talk about his childhood, and the prospect hits harder than the striker’s divine left-footed shots. Kasim’s left foot has always been a legend among his Legion teammates, as has his run from Ghana to Alabama.

For the first time since arriving in Birmingham four years ago, Kasim recently sat down for a one-on-one interview about his journey from one of West Africa’s most crowded slums to the place where he is now. Kasim is one of the original Birmingham Legion FC players, and at this point he has lived in Birmingham longer than anywhere else outside of Ghana. He still doesn’t have a car, but that’s only because he sends so much money home for his family.

I’m just gonna come out and say it. Mercedes-Benz of Alabama, which is a major team sponsor, needs to step up its game. Kasim is an emerging star in this city, and Birmingham needs to take care of its own.

Over the past four years, Kasim has gone from scrawny and talented prospect to Birmingham Legion FC’s most beloved player. Now he could also be the best in the team. Kasim’s goals in last week’s 2-1 win over Charleston Battery were stunning strikes and some of the most exciting signs we’ve seen from this club to date show they are building a solid framework for success long-term.

The first goal was nicebut I still replay the second rocket launch several times a day.

Kasim has been at Birmingham since the start of the club’s season, and during that time he has steadily developed alongside more established pros. First it was Chandler Hoffman, then Brian Wright. Neco Brett was the target after that and Junior Flemmings also co-starred.

This season it’s supposed to be Juan Agudelo, but the former United States international has been slow to find his form at Birmingham. Meanwhile, Kasim steps into a leading role that Coach Tommy Soehn and President Jay Heaps have always envisioned. It was Kasim who scored Legion’s first goal in club history in 2018, and it was Kasim who looked like an unstoppable force last week against Charleston Battery.

Legion returns to Protective Stadium at 7 p.m. Wednesday night against Miami FC (4-3-1). It’s a big game for Legion (3-3-2), who have won back-to-back games after a sluggish start to the season. The team is, however, in the process of finding its identity. Agudelo will be available for Birmingham for the first time in several weeks, and Legion traded striker Macky Diop to Detroit City FC last week.

Agudelo is the nationally recognizable name, but the face of this team is Kasim. He best represents the club’s team culture and everything he did at Birmingham. Three Sparks started with nothing but is now one of the most respected franchises in the USL Championship. Thanks to Legion’s support system, Kasim got to work and transformed his body.

It may sound crazy, but when Kasim came to the United States in 2018, he had to learn to eat more food. This has never been an option before.

When he was young, there was never enough food. Life was so different in Ghana that it’s hard even for Americans to understand. For Kasim’s mother, football was a waste of time and resources. She wanted Prosper to go to school. All he wanted was to play football. To punish Prosper for playing football, mom Kasim wouldn’t feed him.

“I told you not to go and you went,” Kasim recalled, his mother saying, “so there’s no food for you.”

It’s hard to imagine, but Kasim says it’s sometimes like that in Africa. His family used to not eat, or not enough. Kasim may be a little hungrier.

He was good at football, though, and everyone in his neighborhood knew that, so they took care of him.

Kasim is the seventh of eight siblings from the sprawling migrant town of Nima, on the outskirts of Ghana’s capital Accra. Nima has a bad reputation in Ghana, Kasim explained, but people there love and care for each other. Community ties are strong. It is slums, however, and one of the poorest and most crowded places in West Africa.

“Everyone there has to be scrambling,” Kasim said.

King Maestro, he was called in Nima when he was younger. All of his Birmingham Legion FC teammates now call him Peezy.

Joseph Goodman is a columnist for the Alabama Media Group, and author of “We Want Bama: A season of hope and the formation of Nick Saban’s ‘ultimate team'”. You can find him on Twitter @JoeGoodmanJr.